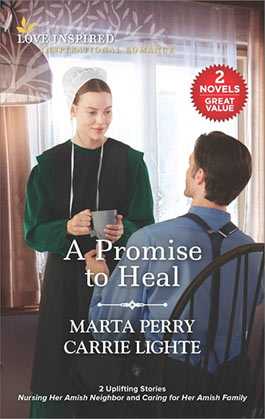 Love Inspired
April 2022—Re-release of Nursing Her Amish Neighbor by Marta Perry and Caring for Her Amish Family by Carrie Lighte
Miniseries: The Brides of Lost Creek, Book Six

Seeking a break from her nursing duties, Miriam Stoltzfus returns home to Lost Creek—and encounters her most difficult patient yet. Her childhood neighbor, Matthew King, is suffering after an accident left him injured and his younger brother dead. But he doesn’t want anyone’s help. Can Miriam guide him through his grief to prove he’s still the strong, confident man she remembers?

Caring for Her Amish Family by Carrie Lighte

When Anke Bachman agrees to care for her Englisch nephew despite disapproval from her community, moving in to a derelict old house is her only option. With newcomer Josiah Mast’s help, she might just be able to make the place livable. But Josiah’s past has him wary of any hint of scandal. As their feelings blossom, can Josiah and Anke find acceptance in the community…and a future together?

Matthew King heard the footsteps on the back porch and knew his father had finally come home. He’d been over at the Stoltzfus place next door long enough…talking about Matt, he felt sure. It was dark already, although the daylight lingered long on these August evenings.

Daad would come into the old farmhouse quietly, not wanting to wake the household, and especially Matt, sleeping on the first floor since the accident.

But Matt wasn’t asleep. He didn’t sleep much anymore, not unless he took those little white pills that the doctor had prescribed. And he didn’t even have them at hand. Daad had insisted they be kept in one of the kitchen cabinets, maybe afraid of what Matt might do if they were too easily accessible.

However appealing oblivion might be, even on the worst days, he’d never take that way out. It would be too hard on his parents, as well as being a violation of their faith. He wasn’t sure he even cared about that any longer, but they did.

Matt shoved the pillow up behind him, his gaze wandering around the room. They’d put him in the sewing room, so he could be on the ground floor. The quilting frame was still propped against the wall, and the sewing machine, covered with a sheet, sat in the corner. Inconveniencing everyone, that was what he was doing. Better if he had died in the accident, like David.

The familiar pain and grief swamped him, only to be chased away by rage. Better if he had died instead of David, that was what he thought. And certain sure better if that reckless drunken teenager had killed himself instead of David. But no, he’d walked away with hardly a scratch, while Matt’s family’s lives were changed forever.

Forgive, said the church. But this wasn’t something he could forgive. The bishop came to see him, praying for him, sitting endlessly beside the bed. Time, he’d said. Give it time. God’s purposes will become clear. Our job is just to obey.

But all the time in the world wouldn’t make this any better. David was gone.

The back door closed softly, and he heard Daad’s quiet footsteps cross the wide boards of the kitchen floor and stop. He must have walked to the hall and waited, looking and listening. He’d see that the light was still lit in Matt’s room. He’d come in.

Sure enough, the footsteps approached. A slight tap on the door was followed by the door opening, and Daad stepped inside.

“Everyone else asleep?” he asked.

Matt shrugged. “They went up a half hour ago. Whether they’re sleeping, I couldn’t say. Well, did you convince Miriam to take on the hopeless case?”

He could hear the bitterness in his voice. He wanted to take it away, but he couldn’t.

Daad’s weathered face tightened. “It is not hopeless. Nothing in God’s creation is hopeless unless people make it so. And yah, Miriam has agreed to come and help us.”

“Maybe she can help Mamm. She can’t help me.” His jaw set. “And she won’t be around very long.”

He’d make sure of that.

Daad’s lips quirked in what might have been a smile. “Wait and see. You may be surprised.”

Matt shook this off impatiently. “That little thing? Shy and serious and afraid of her own shadow? She’s not going to make any difference to me.”

He was being unfair to Miriam, he knew. And Daad knew it, too. That’s why he was frowning, but he didn’t say anything more about Miriam. Instead he glanced around the room.

“Do you need anything before I go up?”

Just a new pair of legs, he thought, the bitterness engulfing him. But he wouldn’t say it. Daad had enough to bear without him pitying himself.

“Good night, son.” His father went out quickly, probably glad to leave the sound and smell of the sickroom behind.

Matt shoved at the pillow again. Daad might be confident about Miriam, but he figured he knew her better after growing up next door. She was a sweet kid, but there was no way she’d get him to do anything he didn’t want to do. And he didn’t want to waste his time on exercises that wouldn’t make him the man he’d been before.

No, Miriam could try her best. But he was a hopeless case, and the sooner she accepted that, the better it would be for both of them.