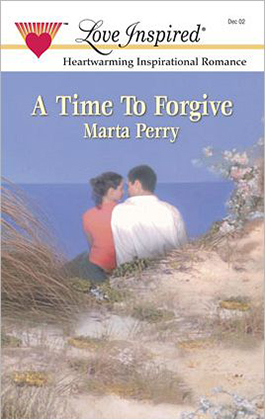 Some men were just unforgettable. And Adam Caldwell was never far from Tory Marlowe's thoughts. Now that she was back in town, Tory hoped that their one magical night might help Adam remember her . . . and help her fulfill a promise made.

Adam wasn't sure he wanted Tory prying into his life, trying to dig up a past that haunted him. But as much as he tried, he soon found himself once again enchanted with her pure heart and unwavering faith. Could Tory's love help Adam open his own heart once more to God . . . and love?

Adam Caldwell stared, appalled, at the woman who'd just swung a sledgehammer at his carefully ordered life. "What did you say?"

The slight tightening of her lips indicated impatience. "Your mother-in-law hired me to create a memorial window for your late wife." Her gesture took in the quiet interior of the Caldwell Island church, its ancient stained-glass windows glowing in the slanting October sunlight, its rows of pews empty on a weekday afternoon. "Here."

He'd always prided himself on keeping his head in difficult situations. He certainly needed that poise now, when pain had such a grip on his throat that it was hard to speak. He put a hand on the warm, smooth wood of a pew back and turned to Pastor Wells, whose call had brought him rushing from the boatyard in the middle of a workday.

"Do you know anything about this?"

The pastor beamed, brushing a lock of untidy graying hair from his forehead. "Only what Ms. Marlowe has been telling me. Isn't it wonderful, Adam? Mrs. Telforth has offered to fund not only the new window, but the repairs on all the existing windows. God has answered our prayers."

If God had answered Henry Wells's prayers in this respect, He'd certainly been ignoring Adam's. Adam glanced at the woman who stood beneath the largest of the church's windows, its jewel colors highlighting her pale face. She was watching him with a challenge in her dark eyes, as if she knew exactly how he felt about the idea of a memorial to Lila.

She couldn't. Nobody could know that.

He summed up his impressions of the woman—a tangle of dark brown curls falling to her shoulders, brown eyes under straight, determined brows, a square, stubborn chin. Her tan slacks, white shirt and navy blazer seemed designed to let her blend into any setting, but she still looked out of place on this South Carolina sea island. Slight, she nevertheless had the look of a person who'd walk over anything in her path. Right now, that anything was him.

"Yes." He glanced at the card she'd handed him. Marlowe Stained Glass Studio, Philadelphia. Not far from his mother-in-law's place in New Jersey. Maybe that was the connection between them. "Ms. Marlowe. Caldwell Island's a long way from home for you." His South Carolina drawl was a deliberate contrast to the briskness she'd shown. A slow, courteous stone wall, that was what was called for here. "Seems kind of funny, you showing up out of the blue like this."

She lifted those level brows as if acknowledging an adversary, and he thought her long fingers tightened on the leather bag she carried. "Mrs. Telforth gave me a commission. I'm sorry Pastor Wells didn't realize I was coming. I thought Mrs. Telforth had notified him. And you."

"Also seems kind of funny that my mother-in-law didn't get in touch with me first."

Actually, it didn't, but he wasn't about to tell this stranger that. Mona Telforth blew in and out of his life, and his daughter's life, like a shower of palm leaves ripped by a storm—here unexpectedly, gone almost as quickly.

"I wouldn't know anything about that, but she spelled out her wishes quite clearly." The overhead fan moved the sultry air and ruffled the woman's hair. "She said she'd been thinking about this for some time, and she wants me to create a window that will be a tribute to her daughter's life and memory."

Pain clenched again, harder this time. Mona Telforth didn't know everything about her daughter's life. She never would. He'd protect her memories of Lila, but he wouldn't walk into this sanctuary every Sunday and look at a window memorializing a lie.

He inhaled the mingled scent of flowers and polished wood that always told him he was in the church. A place that meant peace to him had turned into a combat zone. "You have some proof of this, I suppose."

A soft murmur of dismay came from Henry. "I'm sure Ms. Marlowe is telling us the truth, Adam."

The woman didn't even glance toward the pastor. She was quick—he'd give her that. She'd already sized up the situation and realized he was the one she had to deal with, not Henry.

"I'm not a con artist, Mr. Caldwell. This commission is real. Take a look." She pulled an envelope from her oversize shoulder bag and thrust it toward Adam. If the paper had been heavier, she'd probably have thrown it.

The letter was definitely from Mona, written in the sprawling hand he recognized. And in spite of straying from the point a time or two, she made her wishes clear. She was aware of the deteriorating condition of the existing windows, and she'd fund all the repairs if she could have one window to honor her daughter's life. She'd even added the inscription she wanted on the window. Lila Marie Caldwell, beloved daughter, wife, mother.

If his jaw got any tighter, it would probably break.

Tory Marlowe seemed just as tense. Her hands clenched, pressing against her bag, as if she wanted to snatch the letter back. "Satisfied?"

"Ms. Marlowe, it's not a question of my being satisfied." He tried to identify the look in her velvet brown eyes when she wasn't actively glaring at him.

It took a moment, but then he had it. Loneliness. Tory Marlowe had the loneliest eyes he'd ever seen.

A vague feeling of recognition moved in him. "Have we met before? You seem familiar to me."

She withdrew an inch or two. "No. About the commission—"

He tried to shake off the sense that he should know her. "My mother-in-law is a person of whims. I'm sure she was interested when she wrote this, but she's probably gone on to something else already." He could only hope. "You'd best go back to Philadelphia and look for another commission. This one isn't going to work out."

He saw the anger flare in her face, saw the effort she made to control it.

"It almost sounds as if you don't want a memorial to your late wife, Mr. Caldwell."

Now he was the one struggling—with grief, anger, betrayal. How could this woman, this stranger, cut right to the pain no one else even guessed at?

"Of course he does." Henry sounded scandalized.

The woman glanced at the pastor, startled, as if she'd forgotten he was there. Adam had almost forgotten Henry, too. He and Tory Marlowe had found their own private little arena in which to fight.

He shoved his emotions down, forcing them behind the friendly, smiling mask that was all his neighbors ever saw fromhim. "Pastor, you don'tneed to defend me. Ms. Marlowe is entitled to her opinion."

"Why, Adam and Lila were the most devoted couple you could ever want to meet. Everyone loved Lila."

Everyone loved Lila. Including, Adam supposed, the man she'd been running to when the accident took her life. For one insane moment he wondered what they'd say if he blurted the truth.

Speaking the truth in love, we grow up in all things into Christ… The Bible verse Grandmother Caldwell had given him on his baptism flitted through his mind, and he shook it off with a quick glance at the carved wooden baptismal font that stood near the pulpit. The truth couldn't be told about this. He might somehow, someday, be able to deal with Lila's desire to be rid of him. He couldn't ever forgive the fact that she'd been ready to desert their daughter.

Jenny. Determination hardened his will. Jenny idolized the mother she barely recalled, and she must never learn the truth. He had to keep his secret for her sake.

He rallied his defenses. "Both Ms. Marlowe and my mother-in-law are forgetting something, even if Mona does mean to go ahead with this."

He managed a smile, knowing he was on firmer ground. "It's up to the church council to decide if they want a new window." He gestured toward the stained glass on either side of the sanctuary. "As you can see, we have a full complement of windows. I don't think they'll want to destroy one in order to build something different, no matter how generous the gift."

"They're going to lose one anyway, regardless of whether I replace it." She shot the words back. "Have you taken a good look at the second one on the left?"

"Such bad shape," Henry murmured. He walked to the window with the image of Moses and the burning bush. "It's one of the oldest ones. Is it really beyond hope?"

"It would probably shatter if we took it down for repair. I could rebuild it the way it is, but that wouldn't meet the terms of the commission." She moved to the window and outlined a fragment of rose glass, her finger moving as lovingly as if she touched a child. "It might be possible to save some of the pieces and incorporate them in the new window."

"Do you really think so?" Henry's eager tone sounded a warning note to Adam. Henry's enthusiasm would sweep the rest of the board along if Adam didn't find some way of diverting this project.

Henry and the woman swung around to face him, and for an instant they seemed allied against him.

Nonsense. This church was built and maintained by Caldwells, had been since the first Caldwell set foot on the island generations ago. Henry would side with him, not with a stranger.

"We can't do anything until I talk to my mother-in-law and find out if she really intends to pursue this project." Adam tried to smile, but his lips felt too stiff to move. "Frankly, I think you're here on a wild-goose chase, Ms. Marlowe. Naturally, if she has changed her mind, we'll cover your travel expenses back to Philadelphia."

Tory took a quick, impulsive step toward him, and again he had that sense of familiarity. Then she stopped, shaking her head. "That's very generous of you. But I don't think I'll be needing it."