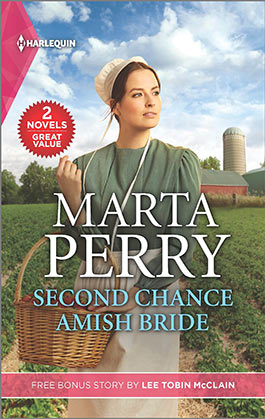 Falling for the nanny

Caring for her late cousin's kinder is Jessie Miller's duty, even if it means seeing their father again. Years ago, she thought Caleb King might be her husband--until he married her cousin instead. Laid up with a broken leg and a busy farm, Caleb needs help--not a reminder of his late wife. But is gentle, kind Jessie exactly what Caleb's little Amish family needs?

Susan Hayashi is everything Sam Hinton is not looking for: energetic, outspoken and spontaneous. Yet the wealthy widower can't deny that the young teacher is great with his daughter, Mindy. In desperate need of a summer nanny, Sam hires Susan. His head says she's all wrong for them, but a part of him believes that this unexpected nanny might really be his Mrs. Absolutely Right...

The hospital van bounced over a rut in the farm lane, and Caleb King leaned forward to catch the first glimpse of his home. At last—those weeks in the rehab hospital after his leg surgery had seemed endless, but finally he was coming home. If only he could jump down from the van, hug his kinder, and plunge back into the life of being a dairy farmer.

But he couldn’t. His hands tightened on the arms of the wheel chair, and he glared at the cast on his leg. Home, but how much longer would he have to count on the kindness of his family and neighbors to keep the farm going?

Caleb glanced toward the Fisher farm across the fields. The spot where the barn had been before the fire was cleared now, and stacks of fresh lumber showed a new barn would soon rise in its place. For an instant he in was back in the burning structure with Sam Fisher, struggling to get the last of the stock out before the place was consumed. He heard again Sam’s shout, saw the fiery timber falling toward him, tried to dive out of the way…

He should think himself blessed that it had only been his leg that suffered. And doubly blessed that Sam had hauled him out of there at the risk of his own life.

The van stopped at the back porch. Caleb reached for the door handle and then realized he couldn’t get it open. He’d have to wait for the driver to lower the wheelchair to the ground. How long until he’d be able to do the simplest thing for himself? He gritted his teeth. He was tired of being patient. He had to get back to normal.

By the time Caleb reached the ground, Onkel Zeb was waiting with Caleb’s two little ones, and his heart leaped at the sight of them. Six-year-old Becky raced toward him, blond braids coming loose from under her kapp, which probably meant Onkel Zeb had fixed her hair.

“Daadi, Daadi, you’re home!” She threw herself at him, and he bent forward to catch her and pull her onto his lap, loving the feel of her small arms around him.

“Home to stay,” he said, and it was a promise. He hugged her tight. His young ones had lost too much with their mother’s desertion and death. They had to know that he was always here for them.

Reminding himself that whatever Alice’s sins, he must forgive her, he held out his hand to Timothy, who clung to Onkel Zeb’s pant leg. “Komm, Timothy. You know Daadi, ain’t so?”

Little Timothy was almost four, and his blue eyes had grown huge at the sight of the lift and the wheelchair. But at the sound of Caleb’s voice, he seemed to overcome his shyness. He scrambled into Caleb’s lap, managing to kick the heavy cast in the process.

Caleb stopped him with a shake of his head. “It’s worth it for a big hug from my boy.”

Nodding, Onkel Zeb grasped Caleb’s shoulder, his faded blue eyes misting over. His lean, weathered face seemed older than it had been before the accident, most likely from worry. “Ach, it’s wonderful gut to have you home again.”

The driver slammed the van door, smiling at the kinder. “Don’t forget, I’ll be back to pick you up for your therapy appointment next week.” He waved as he rounded the van to go back to the driver’s seat.

Caleb grimaced as the van pulled out. “I wish I could forget it. I’d like to be done with hospitals.”

“Never mind. You’re getting well, ain’t so? That’s what’s important.” Zeb started pushing the wheelchair toward the back door, where a new wooden ramp which slanted down from the porch. “Your brother and Sam Fisher put the ramp in last week, so it’d be all ready when you came home.”

“Nice work.” Of course it was. His brother Daniel was a skilled carpenter. Caleb tried to look appreciative, but it was hard when he kept seeing reminders of his helplessness everywhere he looked. “Is Sam still helping with the milking?”

“I told him not to both coming in the morning any more. With Thomas Schutz working every day, we’re getting along all right.” Zeb paused. “I was thinking it might be gut to have Thomas stay on full-time even after you’re back on your feet. We could use the extra pair of hands.”

Caleb shrugged, not willing to make that decision so quickly. Still, Thomas seemed eager to earn the money for his widowed mother, and he was a bright lad. They could do worse than take the boy on until Timothy was of an age to help.

“At least for now we’ll keep him full-time,” he said. “And we’ll have to have Edith Berger continue with the house and the young ones.”

Onkel Zeb stopped pushing when they reached the door. Caleb glanced up to surprise a look of discomfort on his face.

“About Edith…her daughter has been having some health troubles and needs her mamm. So Edith had to go to her. She isn’t coming anymore.”

Caleb’s hands clenched again as the chair bumped over the doorstep into the house. He could hardly care for the kinder when he couldn’t even go up the stairs. “We’ll have to find someone…”

The words dwindled off as they entered the kitchen. A woman in Plain dress stood at the stove, taking a pie from the oven.

“Here’s a blessing we didn’t expect.” Onkel Zeb sounded as if he forced a note of cheerfulness into his voice. “Look who has komm to help us out.”

The woman turned as he spoke. Soft brown hair drawn back into a knot under a snowy kapp; a dark green dress with an apron to match that made her hazel eyes look green—it wasn’t one of the neighbors or someone from the church. It was Jessie Miller, cousin of the wife who’d left him, and the last person he wanted to find in his own kitchen.

For a long moment they stared at each other. Jessie’s plain oval face might be a bit paler than normal, but if she was uncomfortable, she was trying not to show it. Caleb’s jaw hardened until it felt it might break. Jessie had offered her assistance once before, just after Alice left, and he’d turned her down in no uncertain terms. What made her think she could expect a wilkom now?

He could hardly say that he was happy to see her, but a warning look from Onkel Zeb reminded him that the kinder were looking on. “Yah, it’s wonderful gut to be here.” Becky pressed close to the chair, and he put his arm around her. “What are you…how did you get here?” And why have you komm?

“Jessie took the bus and got a ride out from town.” Zeb sounded determined to fill up the silence with words, probably because he was afraid of what Caleb might say. “It’ll be wonderful nice for the kinder to get to know Cousin Jessie, ain’t so?”

Caleb frowned at his uncle, unable to agree. He supposed, if he were being fair, he’d have to admit that Alice’s family deserved some chance to get to know her children, but not now, not like this.

Before he could speak, Zeb had seized the handles of the chair. “I’ll show you the room we fixed up for you so you could be on this floor. Becky, you and Timothy give Cousin Jessie a hand with setting the table for supper. Daadi must be hungry, and Onkel Daniel will be in soon.”

Becky let go of Caleb reluctantly and went to the drawer for silverware. Timothy raced to get there first, yanking so hard the drawer would have fallen out if Jessie hadn’t grabbed it.

“Ach, you’re a strong boy,” she said, a bit of laughter in the words. “Best let Becky hand you the things, ain’t so?” She smiled at Becky, but his daughter just set her lips together and proceeded with the job. Even at her young age, Becky had a mind of her own.

Zeb pushed Caleb’s chair to the back room that had been intended to be a sewing room for Alice. The hospital bed looked out of place, but he had to admit it would be easier to get into and out of than a regular bed.

Once they were inside, Caleb reached back to pull the door closed so no one could overhear. He swung to face his uncle.

“What is she doing here?” he demanded.

Onkel Zeb shrugged, spreading his hands wide. “She just showed up. Seems like word spread out to Ohio about your getting hurt, and Jessie said she thought she was needed.”

“Well, she’s not.” Caleb clamped down on the words. “We’ll do fine without her, so she can just take tomorrow’s bus right back again.”

“Ach, Caleb, you can’t do that.” His uncle’s lean, weathered face grew serious. “Stop and think. What would folks think if you turned your wife’s kin out of the house? What would the bishop and ministers say?”

“I don’t want her here.” He spun the chair to stare unseeing out the window. “I don’t need any reminders of what Alice did.”

“What Alice did, not Jessie,” Zeb reminded him. “It’s not Jessie’s fault. She only wants to help, maybe thinking she can make up a little for what her cousin did.”

“She can’t.” He bit off the words. It was easy telling himself that he had to forgive Alice. It wasn’t that easy to do it.

“Even so, you’ll have to agree to let her stay for a short visit, at least.” His uncle pulled the chair back around to give Caleb the look that said he meant business. “I’ll not have you hurting the woman for someone else’s wrongdoing.”

Onkel Zeb hadn’t often given orders to Caleb and his brothers, even though he’d shared the raising of them. But when he did, they listened.

Caleb clenched his jaw, but he nodded. “All right. A short visit—that’s all. Then Jessie has to go.”