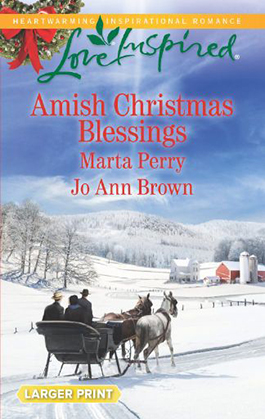 Three years ago, the man Anna Zook hoped to marry left her and their Amish community for the English world. Now devoted to proving her abilities as a midwife, Anna has given up on marriage and children for herself. But when Benjamin Miller returns, now a changed man, can delivering a Christmas baby reunite these two hurting hearts?

If the door to the exam room at the birthing center hadn’t been ajar, Anna Zook would never have heard the hurtful comment.

“…so long as you’re the one to catch the baby, and not the Zook girl. She’d too young and inexperienced to be birthing my first grandchild.”

The door closed abruptly, cutting off anything else that might be said, but Anna recognized the speaker—Etta Stoltzfus, mother-in-law of one of her partner Elizabeth’s clients. Despite the fact that Anna had been a full partner in the midwife practice for over a year, many in Lost Creek’s Amish community still saw her as the quiet, shy girl she’d been when she began her apprenticeship with Elizabeth.

The December chill outside seemed to seep into her heart. Would the people of Lost Creek ever accept her as midwife, or would she always be walking in Elizabeth’s shadow?

Anna tried to concentrate on the patient record she was reviewing, but the doubts kept slipping between her and the page. It was natural enough that folks turned to Elizabeth, she told herself firmly. Elizabeth Miller had been the only midwife in the isolated northern Pennsylvania Amish settlement for over twenty years. It would just take time and patience for them to accept her, wouldn’t it?

The door opened, and a little parade came out—Etta Stoltzfus, looking as if she’d just bit into a sour pickle, her daughter-in-law, Dora, who looked barely old enough for marriage, let alone motherhood, and Elizabeth, whose round, cheerful face was as serene as always.

Small wonder folks trusted Elizabeth—she radiated a sense of calm and assurance that was instantly soothing. Much as Anna tried to model herself on Elizabeth, she never quite succeeded in doing that.

A blast of cold air came into the outer office as the front door opened, and Anna spotted young James leap down from the buggy seat, clutching a blanket to wrap around his wife.

Elizabeth closed the door behind them and turned to Anna, rubbing her arms briskly. “Brr. It’s cold enough to snow, but Asa says not yet.”

Anna nodded, knowing Elizabeth, so confident in her own field, trusted her husband implicitly when it came to anything involving the farm. Maybe that was the secret of their strong marriage—the confidence each had in the other.

“You heard what Etta said, ain’t so?” Elizabeth’s keen gaze probed for any sign that Anna was upset.

“Ach, it’s nothing I haven’t heard before.” Anna managed to smile. “Naturally Etta feels that way. She’s known you all her life.”

“Then she ought to trust my judgement in training you.” Elizabeth sounded as tart as she ever did. “I think Dora might be happier with you, being closer to her age and all, but she’s too shy to venture an opinion different from Etta’s.”

“It will all be forgotten when they see the baby. When are you thinking it will be?”

“Most likely not until well after Christmas.” As if the words had unleased something, Elizabeth’s blue eyes seemed to darken with pain. She glanced out the side window toward the farmhouse, making Anna wonder what she saw there other than the comfortable old farmhouse that had sheltered generations of the Miller family.

“Elizabeth?” Anna stood, moving quickly to put her arm around her friend’s waist. “What is it?”

“Ach, nothing. Just foolishness.” Elizabeth shook her head, but she couldn’t disguise the tears in her eyes.

The older woman brushed a tear away impatiently. “Nothing.” She bit her lip. “It’s just…this will be the third Christmas without Benjamin.”

The name struck Anna like a blow to the heart. She forced herself to concentrate on Elizabeth’s pain, not allowing herself to recognize her own. “I know,” she murmured. “Perhaps…” Anna tried to think of something reassuring to say, but what was there?

“I’m sorry,” she said finally, knowing how inadequate it was. Elizabeth didn’t know there’d ever been anything between her son and her young apprentice, and that was probably for the best, given how things had turned out.

Elizabeth sucked in a breath and straightened. “Asa doesn’t want to talk about Ben’s leaving. I try not to burden him with my sorrow. But oh, if only our boy would come home to us.”

“Maybe he will.” Did she wish that? For Elizabeth’s happiness, for sure. But for herself—how would she manage if Benjamin did come back?

“I keep praying. That’s all I can do.” Elizabeth pressed her cheek against Anna’s for a moment. “Ach, I must get back to the house and start some supper. Are you coming now?”

She’d lived with the Miller family since she’d come from Lancaster County as apprentice to Elizabeth. Each time she’d suggested she might find a place of her own, it had led to such an outcry that she’d given up, knowing Asa and Elizabeth meant it. They treated her as the daughter they’d given up on having after their four boys. How could she walk away from that?

Once Elizabeth had gone, Anna moved slowly around the four-room center, built by Asa and his sons so that Elizabeth would have a place close to home for meeting patients. Still, many of their mothers preferred having babies at home, so the two of them spent hours each week traveling from one Amish home to another.

When she found herself rearranging the stack of towels in the cabinet for the third time, Anna forced herself to recognize the truth. She was avoiding the thing she didn’t want to think about—the beautiful, painful truth of her relationship with Benjamin.

Anna stood at the window, but she wasn’t seeing the frigid winter landscape. Instead she looked up into the branches of the apple tree in the side yard, feeling the soft breeze of a summer evening brush her skin.

She and Benjamin had come home from a family picnic at the home of Ben’s grandparents, and they’d loitered outside for a few minutes, watching the fireflies rise from the hay field and dance along the stream.

Ben had been telling her a story of climbing to the very top of the apple tree in response to a dare from one of his brothers. He’d fallen when a branch broke and broken his arm, but he didn’t seem to regret it, laughing at the memory. That was Ben, always up for a dare.

She’d shifted her gaze from the branches to his laughing face, meaning to chide him for such foolishness, but her gaze became entangled with his, and her breath caught, the words dying.

Ben’s eyes, blue as a summer sky, seemed to darken as he studied her face. His gaze had lingered on her lips. And then his lips had found hers, and a totally unexpected joy exploded inside her.

She’d never known how long they’d stood there, exchanging kisses, laughing that it had taken them so long to recognize the feelings between them. When she’d finally slipped into the house and up to her room, she’d held the warm assurance of his love close against her.

And the next day he’d been gone, leaving only a note for his parents saying he was going to see something of the world.

Anna tried to shake off the memories. She seldom let herself relive them, because the aftermath had seen so painful. No one knew about her and Ben, so she’d had to pretend that her pain was only for Ben’s family, not for herself.

After three years, it should have become easier. One night—that was all she had to block from her memories.

A final check around the center, and she was ready to go. She was just slipping on her coat when she heard a car pull up by the front door.

Anna frowned. One of their Englisch clients? No one was scheduled to come in today. She could only hope it wasn’t an emergency.

Footsteps sounded on the porch, and she hurried to the door. She flung it open almost as soon as the knock sounded and stumbled back a step, the familiar room spinning around her.

The man standing on the porch wore boots, jeans, and a black leather jacket zipped up against the cold, but he wasn’t an Englischer. He was Benjamin Miller.