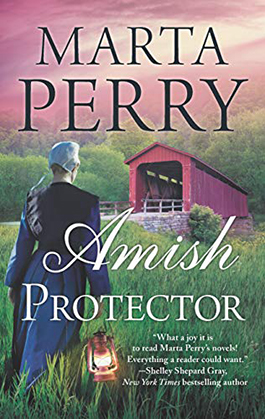 Joanna Kohler treasures the independence her Amish quilt shop provides. She rarely leans on others, yet finding an injured woman on her property makes her grateful for the store owner next door, Noah Troyer. Calm and unflappable, Noah offers support. He also points out the strong resemblance between Joanna and the unconscious stranger…

Noah may admire Joanna, but the bishop’s daughter is out of reach. Though he’s made a good life, Noah still feels shadowed by the shame his father brought on the community. But it’s his duty to aid his lovely neighbor, especially when danger draws close. As he and Joanna unearth answers about her past, Noah will have to confront his own if he’s to have a chance at building a future with the woman he’ll love forever.

Home again. Joanna Kohler moved to the door as the small bus that connected the isolated Pennsylvania valley towns drew up to the stop at River Haven.

"Denke, Harry." She lifted a hand in a wave as she stepped down. The driver was Englisch, but he’d been around the Amish long enough to know a few words.

The elderly driver nodded, obviously ready for her to get off so he could finish his last trip of the day. Joanna stepped clear as he closed the door and pulled out.

Glad to be home, Joanna adjusted her packages and started down River Haven's Main Street. Everything was closed, of course. It was after seven, and the days grew shorter with what seemed increasing speed in October. She drew her sweater closed against the nip in the air and thought with pleasure of a bowl of hot chicken soup for supper.

Another few steps brought her to the quilt shop where she paused, gazing with pleasure at the window display she'd put up over the weekend. Quilts in autumn colors spilled across an old wooden wheelbarrow, and the pumpkins and autumn leaves she'd added drew the eye. At least, she hoped so. Smiling at her own enthusiasm for the shop she and her aunt ran, she rounded the corner and headed back the alley toward the enclosed stairway that lead to their apartment above the shop.

A whicker from the small stable in the backyard informed her that Princess would not let her go inside without some attention. Setting her packages on the stoop, she followed the noise into the stable, switching on her penlight as she stepped inside. Princess' head poked over the stall bar as she whinnied, the white blaze shining in the light.

"Get on with you," Joanna scolded. "I know perfectly well that Jonas fed and watered you." She patted the soft nose and reached for a carrot from the can that hung beside the door.

The can wasn't there. Frowning, Joanna moved the thin beam of light. It picked up the can tumbled on the floor, carrots spilling out of it. Odd. For sure her younger brother wouldn't have been so careless. The carrots would attract mice, if not something worse.

It was the work of a moment to clean up and give Princess her treat. Joanna double-checked to be sure the nail holding the can was firm and stepped outside. She'd tease Jonas about this one, that was certain sure.

A glow of lamplight from the back of the hardware store next door allowed her to cross to the yard to her door without her flashlight. Noah Troyer, her neighbor, must be working late. Her side of the building was in darkness, since Aunt Jessie was away.

Joanna fitted her key into the lock, and the door swung open almost before she'd turned it. Collecting her packages, she started up the steps, not bothering to switch on her penlight. The stairway familiar enough, and she didn't need—

Her foot hit something. Joanna stumbled forward, grabbing at the railing to keep herself from falling. What in the world…? Reaching out, her hand touched something soft, warm, something that felt like human flesh. She gasped, pulling back.

Clutching her self-control with all her might, Joanna grasped the penlight, aimed it, and switched it on.

A woman lay sprawled on the stairs. The beam touched high-heeled boots, jeans, a suede jacket. Stiffening her courage, she aimed the light higher. The woman was young, Englisch, with brown hair that hung to her shoulders. It might have been soft and shining if not for the bright blood that matted it.

Panic sent her pulses racing, and she uttered a silent prayer, reaching tentatively to touch the face. Warm…thank the gut Lord. She…whoever she was…was breathing. Now Joanna must get her the help she needed.

She glanced up the steps, but that wouldn't help. Even if she could have gotten over the woman without hurting her, the only phone was downstairs, in the shop. Her aunt was away overnight, so she couldn’t help.

Hurrying, fighting for control, Joanna scrambled back down the steps. No use trying the downstairs door into the shop as she’d left it bolted. She burst out into the quiet yard. Even as she stepped outside, she realized it would be faster to go to Noah's back door than around the building.

Running now, she reached the door in less than a minute and pounded on it, calling his name. "Noah!"

After a moment that felt like an hour, light spilled out. Noah Troyer filled the doorway, staring at her, his usually stoic face startled. "Joanna, what's wrong? Are you hurt?"

A shudder went through her. "Not me, no. There's a woman…" She pointed toward her door, explanations deserting her. "Komm, schnell." Grabbing his arm, she tugged him along.

By the time they reached her door, Noah was ahead of her. "We’ll need a light."

"Here." She pressed the penlight into his hand, feeling her control seeping back. Knowing she wasn't alone had a steadying effect, and Noah's staid calm was infectious. "I was just coming in. I started up the steps and found her." She couldn’t keep her voice from shaking a little.

The penlight’s beam picked out the woman’s figure. It wasn’t just a nightmare, then.

Noah went carefully up the steps, stopping just below the motionless figure. Joanna went behind him, keeping her gaze focused on the woman’s pantlegs while she waited. Noah had to see for himself, yah, but they had to get help.

Noah bent over the woman, touching her face as Joanna had done. Then he turned back, his strong body a featureless silhouette.

The question startled her. "I don’t know. I didn't even think about it—I just wanted to get help. We must call the police and tell them to send paramedics, too."

He didn't need to finish. "I'll stay with her," she said quickly. "If she comes around, another woman would be more calming, ain't so?"

Not wasting time, Noah was already half-way out. "I'll be back as soon as I've called. Yell if…" He let that trail off, but she understood. He'd be there if she needed him.

But she'd be fine. She was a grown woman, a businesswoman, not a skittish girl. Given all it had taken her to reach this point, she had to act the part.

Joanna settled as close to the woman as she could get on the narrow stairway. After a moment’s hesitation, she put her hand gently on the woman's wrist. The pulse beat steadily under her touch, and Joanna’s fear subsided slightly. That was a good sign, wasn’t it?

It finally occurred to her to wonder what a stranger was doing here. The poor woman must have come to the wrong door and then fallen on the steps. She couldn’t think of another answer. If only they'd found her earlier…it was just chance that this had happened when both she and Aunt Jessie were out.

The suede of the jacket brushed her hand when she moved slightly. It was as soft as butter. Expensive. The thought teased her mind. Not just a stranger--an expensively dressed strange Englisch woman. Where could she have been going?

She didn't have to think twice to know the woman was a stranger. Anyone who'd lived in River Haven all her life knew everyone, at least by sight.

Her eyes had grown accustomed to the dim light, so she switched off the penlight Noah had left with her. Questions continued to dance through her mind, and she tried to focus on the soft beat of the stranger's pulse. That was a good sign, she reminded herself. The blood was frightening, but head injuries did bleed profusely. Three accident-prone younger brothers had taught her that.

The EMTs would come and whisk her off to the hospital, no doubt for x-rays and stitches and whatever else they thought necessary. By tomorrow she'd be fine, wouldn't she?

The darkness and the silence grew oppressive, and she shivered. If only she had a blanket…she heard the thud of Noah's hurrying footsteps. He stopped at the bottom of the stairs.

"They're on their way. I'd best stay by the door so I can flag them down when they come. How is she?"

"No change." Worry broke through the careful guard she'd been keeping. "What if she's seriously injured? What if I'm to blame? She fell on my steps, after all."

"Ach, Joanna, that's foolishness." Noah's deep voice sounded firmly from the darkness. "It can't be your fault, and most likely she'll be fine in a day or two. It's not as if she fell all the way down. You don't need to worry."

Noah's calm, steady voice was reassuring, and she didn't need more light to know that his expression was as steady and calm as always.

"Does anything get under your guard?" she said, slightly annoyed that he could take the accident without apparent stress.

"Not if I can help it." There might have been a thread of amusement in his voice. "It's enough to worry about the poor woman's recovery without imagining worse, ain't so?"

"I suppose." She straightened her back against the wall, reminding herself again that she was a grown woman, owner of her own business, able to cope with anything that came along.

But she didn't feel all that confident right now. She felt worried. Whatever Noah might say, her instinct was telling her that this situation meant trouble. How and why she didn't know, but trouble, nonetheless.