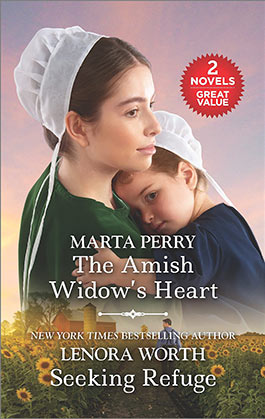 Love Inspired
December 2021—Re-release of The Amish Widow's Heart by Marta Perry and Seeking Refuge by Lenora Worth
Miniseries: The Brides of Lost Creek, Book Four

Can she put the past aside and love again?

She can’t change the past…but can she choose a new beginning?

To secure her young son’s future, widow Bethany Esch steps in to help Daniel Miller keep the store he owned with her late husband running smoothly. But she soon discovers her marriage hid a stunning secret. Though Daniel had no knowledge of her husband’s clandestine life, he’ll now do anything to help Beth. But can his steadfastness convince her to forgive—and love once more?

Bethany Esch looked at her husband's black jackets, hanging from the wooden pegs on the bedroom wall, and her heart failed her. She took a hasty step backward, bumping into the large box her cousin Lydia was carrying, and fought the panic that filled her.

Lydia dropped the box onto the double bed, catching Bethany's arm when she would have fled from the room, her lively face sobering when she saw Bethany's expression.

"Beth?" Lydia shook her arm lightly. "Komm now. It's time we got busy."

Lydia knew her so well. Why didn’t she see that Bethany couldn't get rid of James's clothes? Not yet.

"It's been over a month." Lydia hugged her as if to soften the words, but nothing could really ease them. James was gone.

"I know it's hard, but you'll feel better once it's done, and James's things will be a blessing to someone else."

The tears that came so easily filled Beth's eyes. "It doesn't feel like a month. It feels like yesterday."

She lived it again--the township police officer coming to the door late in the evening, his face somber, his voice halting as he described the accident—the driver going too fast on the narrow road, young and careless, unable to stop when he saw the buggy light—

"I know." Lydia's hand stroked her back in a comforting gesture. "The accident was such a shock. That makes it much worse. But…"

But. Beth wiped tears away with her fingers. Lydia was right, she supposed. James's death would be easier to face once she didn't have constant reminders. Easier for Benjy, too, and that was the force that strengthened her spine. At four, Benjy didn't understand, but he was beginning to accept the fact that Daadi wouldn't be coming home any more.

She could hear him now, giggling at something her niece Janie had said. Fourteen and the child of Beth's oldest brother, Janie had been a treasure over the past month, showing up often to watch Benjy or take him to play with her little brothers and sister.

"Yah, okay." She straightened, trying to find a smile. "You're right. I certain sure can't let Benjamin see me falling apart."

"Gut." Lydia gave a brisk nod of approval. "The sooner we start, the sooner we're done. You hand things to me, and I'll fold and pack."

Taking the first jacket from its hook was the hardest. This was the jacket James wore for worship, and she’d always thought he looked so handsome in it, his fair hair even lighter against the black wool. She forced herself to hand it on quickly, resisting the urge to press it against her face.

Somehow, once she'd done the first one, the action became easier. She was helped along by Lydia's constant flow of chatter, talking about the latest news running through the Amish grapevine of Lost Creek…who was harvesting a big crop of celery, hinting at a wedding soon, how her daad’s vegetable stand was doing now that fall was coming on, who had missed worship last Sunday and why. Lydia, with her lively personality and ready laugh, was a good antidote to pain.

"Did I tell you I have a letter from Miriam?" she said now. "She actually got it out quickly this time. I've already added my share, so you can do yours and put it in the mail."

"I'll try,” she said, although writing a newsy letter felt like an impossible chore just now.

Miriam Stoltzfus, the third of their trio of cousins, had moved out to Ohio to stay with an aunt and uncle several months ago, and they both missed her. Their round robin letters weren't a good substitute for seeing her.

The three of them had been closer than sisters since they were babies sleeping on their mammis’ laps during worship, born within weeks of each other. Better than sisters, maybe, because they didn’t have the rivalry some sisters did: Lydia, lively and mischievous, Miriam, quick and daring, and her, always trying to keep the other two out of trouble.

"You know what Grossmammi would say," Lydia said. "Don't try, just do it."

Beth actually did smile over that—Lydia had caught their grandmother's attitude perfectly. Grossmammi never shrank from any task, no matter how difficult. She had shrunk with age, and her memory might be a little misty, but nothing could quench her spirit. Would she ever reach that calm acceptance of what came?

With the hanging clothes packed away, Beth turned to the bureau. It was easier, she found, if she picked things up without concentrating too much on what they were and just passed them on to Lydia. The very act of doing something positive seemed to be lifting her spirits, making her pay attention to what was going on around her.

Family and church members had been in and out constantly for the past month, taking over so much that there'd been little she had to do. And Daniel, James's partner in the General Store, had taken care of everything there. She was better for something to do.

At some point she had to talk to Daniel and make some decisions about the store, but not yet.

She reached for the last few items in the drawer, her fingers touching something that wasn't cloth. Paper crinkled under her fingers.

Curious, she pulled it out of the drawer to look at. A half-sheet of paper, torn off and folded. Frowning, she flipped it open, read the few words it contained, and felt her heart freeze.

Beth stared at the penciled words, trying to comprehend, but her brain felt as chilled as her heart. She forced herself to concentrate, reading the words as slowly as if they were in a language she barely knew.

I have to see you one more time. Meet me tomorrow night at the usual place. Please. Don't fail me.

There was no signature, only a penciled heart shape. No name. No date. But the meaning was clear, wasn't it?

"Beth? What's wrong? Tell me." Lydia’s arms came around her, and she sounded almost frightened. Beth knew she must look terrible. As terrible as she felt.

"I can't." She stammered the words out and thrust the paper toward Lydia, glad to have it out of her hand. She clung to a faint hope that Lydia would see something different in the words…something that wouldn't shatter her heart and grind it to dust.

Lydia gasped, and then she was silent, probably trying to take it in as Beth had done.

"Maybe…" Lydia was hesitant, her blue eyes dark and troubled. "Maybe it doesn't mean what it seems to."

She didn't sound as if she believed that any more than Beth did.

"What else could it mean?" Anger and pain broke through the ice that encased her. "Someone…some woman…was meeting James on the sly. The usual place—what else could that mean?"

"Maybe…" Lydia faltered, clearly trying to think of some explanation that wouldn’t hurt as much. "Well, maybe it was just someone who had a crush on James. He was attractive, and he could be charming, but it didn't mean anything. You were the one he loved."

She clung to the words. That was true enough, she supposed. James's charm had been what had drawn her to him, back when they were teenagers. With his laughing eyes and his enticing smile, he'd had all the girls in a tizzy at one time or another. But he'd chosen her. He'd married her, promising to be faithful.

Something in her hardened against the pain and grief that threatened to envelop her. He'd promised to be faithful in front of God and the church.

"He was meeting this woman, whoever she was,” she said firmly. She couldn’t ignore the obvious. “That's not an old note—the pencil marks are still dark. Besides, I cleaned everything in this drawer not that long ago."

Her mind started to work again, remembering when that had been. Her gaze met Lydia's. "That was no more than a week before the accident. That note wasn't in the drawer then."

Lydia didn't speak. Most likely she couldn't think of another explanation, any more than Beth could. James had been seeing another woman just before he died. It was incredible. Impossible. But it had happened.

"That night," Beth murmured, almost speaking to herself. "He said he'd be working late in the store. What was he doing out on Owl Hollow Road? I never even thought about that…never questioned it."

"You think it was the night the note refers to?" Lydia understood her quickly. "But you can't be sure of that. And you can't go around asking people." She sounded horrified at the thought.

"No, I can't go around asking." Pain forced the words out as she realized what this would mean to her. "I can only go on wearing black and pretending. No one must ever know, especially not Benjy."

No matter what she felt, she couldn't damage Benjy's memory of his daadi. No matter how much it cost her.

But there was one thing she could do. She could find out if Daniel knew where James had gone the night he was supposed to be working at the store. Daniel was James's best friend as well as his partner. If anyone knew James's secret, it was Daniel.