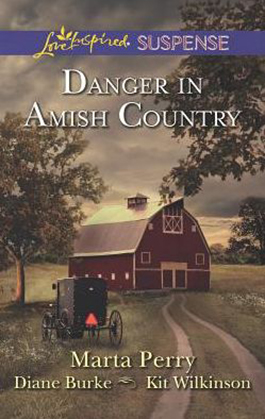 Fall from Grace by Marta Perry
When one of her students witnesses a crime, Sara Esch gets too close to the truth, and widower Caleb King must risk it all for the woman who’s taught him to love again.

Dangerous Homecoming by Diane Burke
Katie Lapp needs her childhood friend Joshua Miller more than ever when someone threatens her late husband’s farm. Can Joshua protect her…even if it endangers his heart?

Return to Willow Trace by Kit Wilkinson
A series of accidents has startled their Plain community…and lead Lydia Stoltz to Joseph Yoder, the man who once broke her heart. At every turn, it seems their shared past hold the key to their future.

Sara Esch smiled as her young scholars burst out into the autumn sunshine at the end of another school day. Even the best of Amish students couldn’t help showing a bit of enthusiasm when freedom arrived at three each weekday afternoon, especially on Friday.

All except one, it seemed. Seven-year-old Rachel King hung back, her small face solemn, as if reluctant to leave her desk.

Sara tried not to let concern show in her expression as she approached the motherless child. Rachel had been in Sara’s one-room school for less than a month, since she and her father arrived in Beaver Run, coming to Pennsylvania from Indiana. That meant Sara didn’t know Rachel as well as she did most of the kinder in her school.

Sara knelt next to the child and spoke softly, knowing her words would be masked by the chatter of the two eighth-grade girls whose turn it was to wash the chalkboards.

“Was ist letz, Rachel?” She asked the question in dialect. She always spoke Englisch in school, but the familiar tongue of home and family might put the child at ease. “What’s wrong?”

“Nothing.” Rachel’s round blue eyes grew rounder still, as if surprised that her teacher had noticed. “Nothing is wrong, Teacher Sara.”

Sara sat back on her heels, studying the small face. Rachel might have been any young Amish girl, with her blue eyes, rosy cheeks, and blonde hair. Her plain blue dress and black apron were like those of every other little girl. But something was different about Rachel King, of that Sara was certain sure.

She took the child’s hands in hers. “You can tell me if anything is troubling you, Rachel. I want you to be happy here in Beaver Run.”

Rachel’s lips trembled, as if she were on the verge of speech. Then she looked over Sara’s shoulder, and her expression lightened.

“Daadi!” She ran to the man who filled the school doorway.

So. Sara got slowly to her feet, mindful of Caleb King’s gaze on her. His arrival meant she wouldn’t hear anything more from Rachel today, anyway. But least she could see that Rachel’s problem, whatever it was, wasn’t with her father. She would hate to have to deal with such an issue.

She took a step toward Caleb, smiling, and stopped when she encountered an icy glare. His face was set in severe lines above the warm chestnut of his beard, and Caleb’s gaze seemed an accusation. Her heart gave an uncomfortable thump.

Caleb patted his daughter’s head. “Go out and play on the swings. I need to talk to Teacher Sara.”

Sara caught a swift flare of panic in the child’s face at the prospect of going outside. She moved toward them.

“Perhaps Rachel could help with washing the boards,” she suggested. “We might step out onto the porch to talk.”

Caleb’s gray-blue eyes grew steely with annoyance, probably at her interference, but he nodded. He stepped back and held the door open like a command.

Sara pushed Rachel gently toward the chalkboard. “Lily and Lovina, you’ll like to have Rachel help you for a bit, ain’t so?”

Lily looked a tad mulish at the prospect, but gentle Lovina seemed to take the situation in and smiled, holding out her hand to the child.

The little girl ran toward her happily enough. Satisfied, Sara stepped through the door, very aware of Caleb’s looming presence behind her. He had a complaint, it seemed.

“What has happened at school to bring my child home so upset she could not even eat her supper?” Caleb didn’t give Sara time to turn around before he threw the words at her. “And to give her nightmares as well? I don’t expect this at an Amish school.”

Stiffening at the implication she was at fault, Sara made an effort to keep her expression calm as she faced the man. “I noticed that Rachel seemed upset today. I was just trying to get her to tell me what was wrong when you came in.”

And whatever it is, I am not to blame, she added silently. Nothing was more important to her than her scholars—they were the only kinder she was ever likely to have.

“You didn’t scold her for anything yesterday?” Caleb didn’t look mollified. “Or let another child bully her?”

“Certainly not. Bullying is not tolerated in my classroom.” She took a deep breath, reminding herself not to let the man’s antagonism rouse her temper. Even teachers in Amish schools had to learn to deal with troublesome parents. “I am as puzzled as you are. Maybe together we can figure out how to handle this problem.”

She met his gaze steadily, and after what seemed a very long moment she had the satisfaction of seeing some of his antagonism fade.

Caleb seemed to realize belatedly that he still wore his black hat. He took it off, revealing hair the same chestnut as his beard. His face was lean and austere seen close-up, and there were fine lines around his cool eyes. He was a widower, so the rumors ran, his wife having died after a long illness. It was natural that he’d be protective of his only child. But not natural at all that he should immediately assume she was at fault.

Sara gathered her scattered wits to concentrate on the problem at hand. “I thought Rachel seemed a little reluctant to leave school yesterday. That’s why I made sure the Miller children walked along with her. She didn’t give you any idea of what was troubling her?”

Caleb shook his head, worry deepening the lines in his face. “When I heard her crying in the night, she sounded so afraid. The only thing she said made no sense. She said der alt would get her.”

“The old man?” Relief swept through Sara. “So that’s it.”

“What’s it?” Caleb demanded, his fists clenching. “Who is this old man who frightened my child?”

“Ach, it’s not real.” She put her hand on his arm in an automatic gesture of reassurance and felt taut muscle beneath the fabric of his coat. She pulled her hand away as if she’d touched something hot, realizing she was probably blushing. She’d treated him as she would one of her brothers, but he was a stranger, despite being Amish.

“Komm.” She moved quickly off the schoolhouse porch, just as glad to turn her back on him. “I’ll show you.”

The schoolhouse sat in the fertile Beaver Creek valley, Amish farms stretching out on either side, while in front of the schoolhouse the long lane led to the paved county road that entered the town of Beaver Creek a bit over a mile east.

Sara turned away from the road, heading across the playground behind the school. Here the ground sloped down to the creek for which the valley was named.

On the other side of the creek the wooded ridge went sharply upward, seeming to lean over the valley protectively. No year-round houses had been built there, but the ridge was dotted with hunting cabins that would be busy during deer season.

“Where are you going?” Caleb’s long strides kept up with hers. “Are you going to answer me about this old man? Does he live back here?”

“In a way.” She raised her arm to point. “See that rocky outcropping? Watch what happens when we move just a little farther.”

A few steps took them to the spot where the rocky cliff suddenly took on a different aspect, its sharp edges forming what a child’s imagination might see as the profile of an old man.

A quick glance at Caleb’s face showed that he understood. “Der Alt,” she said. “The kinder call it that. I forgot that you wouldn’t know.”

Caleb stared at the rocky profile, frowning. “Ja, I see. But I don’t understand what there is about it to frighten her so.”

“Nor I.” Her voice firmed. “But I mean to find out. If one of the older scholars has been telling scary stories to the young ones, that is not—“ She broke off, her gaze arrested by something dark at the base of the cliff face. “Look there. That…that almost looks like—“

“A person.” Caleb finished for her. “Someone is lying there.”