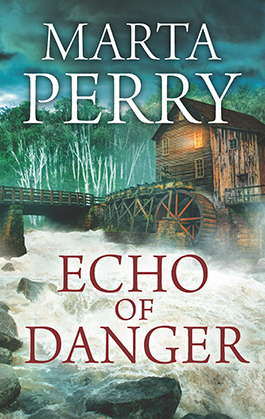 A whisper of a threat looms over widow Deidre Morris. She and her young son have unwittingly become prisoners of her intimidating father-in-law's power. One wrong step could find her son torn from her and in the hands of the influential judge. But when Deidre collides with an intriguing stranger, the prospect of a new friendship gives her renewed hope…until a devastating murder rocks the quiet community of Echo Falls and Deidre learns first impressions can't be trusted.

Attorney Jase Glassman's assignment is straightforward: befriend Deidre, gather incriminating evidence…and allow her dogged father-in-law to take custody of her child. Anything else, including losing himself in her honest charm, will compromise the job he was hired to do. Yet when a murderer ushers danger into the town, Jase's only instinct is to protect Deidre and her son—no matter the sacrifice.

Her father-in-law set down the coffee she’d poured for him and glanced around Deidre Morris’s sunny, country-style kitchen. “I’ve found a buyer for your house.”

The seemingly casual words, dropped into what had supposedly been an impromptu visit to see his grandson, sent ripples of alarm through Deidre. Her own cup clattered, nearly missing the saucer. “I…what did you say?”

Judge Franklin Morris gave her the look he’d give an unprepared attorney in his courtroom. “I said, I’ve found a buyer for you. He’s offering the best price you can expect for a place like this. And you’ll be able to move into Ferncliff by the end of the month.”

Deidre pressed suddenly cold hands against the top of the pine table that had belonged to her grandparents. She should have guessed that there was something behind this visit. Judge Morris was far too busy to drop in on anyone. And nothing he said was ever casual.

She was going to have to take a firm line, clearly, and that wasn’t easy with a man who was accustomed to speak with the force of law. Stupid, she lectured herself. He can’t force you to do anything you don’t want to do, even if he is Kevin’s grandfather.

“I’m afraid there’s some misunderstanding. I have no intention of selling this house.” And certainly not of moving into the chilly mansion where every moment of the day was governed by her formidable father-in-law’s wishes.

“I realize you have a sentimental attachment to your family home.” He seemed to make an effort to sound patient. “But since you won’t have any need of the house once you and Kevin move in with us, selling seems the sensible solution. You can invest the money for the future. However, if you prefer to rent, I suppose that can be arranged.” He’d begun to use his courtroom voice by the end of his little speech.

But she wasn’t either a plaintiff or a defendant. And this house had been home to her family for three generations, now four. “I don’t want to rent or sell. This is my home, mine and Kevin’s. This is where I plan to live.” Surely that was clear enough.

The judge’s face stiffened, making it look very like the portrait of him that hung in the county courthouse, marking his twenty years on the bench. The firm planes of his face, the small graying moustache, the piercing gray eyes—all seemed granted by providence to make Franklin Morris look like what he was, a county court judge.

The chink of a glass reminded her that they were not alone. Kevin sat across from her, his blue eyes huge and round above the chocolate milk that rimmed his mouth. Deidre’s heart clenched. A five-year-old shouldn’t be hearing this conversation.

“Kevin, why don’t you run upstairs and finish the get-well card you’re making for your grandmother. That way Grandfather can take it with him when he goes.” She gave him a reassuring smile, wishing someone would send reassurance her way about now.

“Yes, that’s right.” The judge’s face softened into a smile when he regarded his grandson in a way it seldom seemed to do otherwise. Maybe he felt he had little else to smile about, with his only child dead at thirty-two and his wife constantly medicating herself with alcohol. “She’ll love to have a card from you.”

Kevin nodded, his chair scraping back. Without a word, he scuttled from the kitchen like a mouse escaping the cat.

Her son’s expression reminded Deidre of the most important reason why they’d never be moving into Ferncliff. She wouldn’t allow Kevin to grow up the way his father had, doubting himself at every turn, convinced he could never measure up to what was expected of him. She turned back to the table to be met by a stare that chilled her.

“Deidre, what is this nonsense? I could understand your reluctance to make a move in the immediate aftermath of Frank’s death. But you’ve had nearly a year. It was always understood that you and Kevin would move in with us. We have plenty of room, and it’s the sensible thing to do. With Frank gone, I’m the only father figure the boy will have.”

And that was exactly what Deidre feared most. This was her own fault, she supposed. She should have stood firm when the subject had first come up, but she’d still been dazed at the suddenness of Frank’s death, unable to come to terms with the thought of the screaming, shrieking crash of his treasured sports car against the bridge abutment.

She hadn’t been in any condition then to mount a major battle with the judge, so she’d taken the easy way out, claiming she couldn’t possibly make any more abrupt changes in their lives until they’d become accustomed to the tragedy. When both the family doctor and her minister had chimed in with their support, the judge had graciously backed down.

But now it was the day of reckoning. Taking the easy way out had only postponed the inevitable.

“I realize that you hoped to have us close, especially after Frank’s death.” Deidre chose her words carefully. No matter what damage she considered he’d done to Frank by the way he’d raised him, the judge had lost his only child. “But Frank and I chose to live here, and all of our plans for the future included this house as our home.”

“All that has changed now.” The judge brushed away the years of her marriage with a sweeping gesture of his hand. “Without my son…” He paused, and she feared his iron control was going to snap.

He’d never forgive himself or her if he showed what he’d consider weakness in front of her, and a spasm of pity caught at her throat. His only child gone, his wife an alcoholic…small wonder he had all his hopes centered on his grandson.

The judge cleared his throat, vanquishing whatever emotion had threatened to erupt. “I’m only thinking of what’s best for Kevin. We can offer him so much more than you can alone. Surely you realize that. An appropriate school, the right background…these things count for something in the world beyond Echo Falls.”

Ambition, in other words. That was what he’d wanted for Frank, and he’d never let Frank forget what he’d supposedly given up by coming back to Echo Falls and marrying her instead of going out into the glittering future his father had wanted for him.

But she could hardly use that as an argument with her father-in-law. “Kevin’s only five. There’s plenty of time to be thinking about the right school for him. At the moment, he needs security, warmth, and familiarity in his life, and that’s what he has.” She saw the argument shaping in his eyes and hurried on. “Please don’t think I don’t appreciate all that you and Sylvia do for Kevin. You’re a very important part of his life and nothing can change that.” She managed a smile. “After all, we’re less than a mile away as it is.”

Less than a mile, yes, but to her mind there was a huge difference between the comfortable family house on the edge of town, surrounded by fields, woods, and Amish farms, and the cool, elegant mansion on the hill.

Her father-in-law’s chair scraped back as he rose, standing rigid to look down at her for a long moment. “I’m sorry you can’t see the sense of my offer, Deidre. It would be easier all around if you did.”

He turned, stalking without haste from the room, down the hall, and toward the front door. Deidre, hurrying after him, reached the door in time to have it close sharply in her face.

Well. Her hands were cold and trembling, and she clasped them together, needing something to hold onto. Surely she must be imagining what seemed a threat in the judge’s final words. Hadn’t she?

“Mommy?” Kevin scurried down the stairs, waving a sheet of construction paper. “Grandfather left without the card I made.”

Deidre put her arm around her son to draw him close, taking comfort from his sturdy little body. She held the picture he was waving so she could see it. Kevin had drawn himself, holding a handful of flowers in all sorts of unlikely shades of crayon. He’d printed his name at the top in uncertain letters.

“But my picture…” He clouded up. “I made it especially for Grandma.”

“We’ll put it in an envelope and mail it to her right now, okay?”

That restored his sunny smile, and Kevin ran to the drop-front desk in the corner of the living room. “I’ll get an envelope.”

She hoped. A report that Sylvia was ill usually meant that she’d gotten hold of something to drink. Once started, she couldn’t seem to stop. Much as Deidre grieved for Sylvia, she didn’t mean to expose Kevin to the difficulties inherent in living with her.

That was one more reason why the judge’s plan was impossible. She just wished she could get rid of the sinking feeling that Judge Franklin Morris didn’t give up on anything until he had what he wanted.