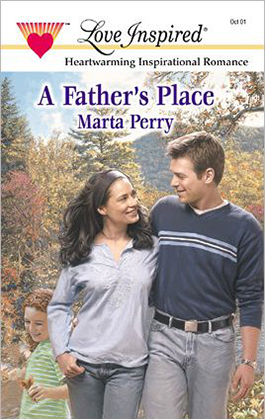 Summoned home for a family emergency, engineer Quinn Forrester could no longer ignore a painful past. And though he didn't plan on staying long, it seemed his precocious daughter had been praying to God a lot lately... and decided He wanted her daddy to marry Sunday school teacher Ellie Wayne.

Drawn to the handsome widower, Ellie yearned to ease his burden with everything in her heart. But she feared that her most closely guarded secret could drive Quinn away. Now she sought a miracle. For if God truly meant for them to become a family, He'd somehow show Quinn where he belonged...

Join the men of Hometown Heroes—childhood friends who uncover love in their own backyards!

He'd come home to the town where he no longer belonged to break up his mother's romance. Put like that, Quinn Forrester decided it didn't sound like a creditable goal. It wouldn't impress the woman he was about to see, and he needed Ellie Wayne's cooperation. Either that, or he needed her surrender.

The tension that had driven him for days cranked up a notch. His natural instinct was to explode, demanding explanations, but that wouldn't work. He'd have to exercise diplomacy to get what he wanted from Ellie Wayne, and his talent for that had grown rusty over years of fighting nature's rampages in places considerably wilder than this one.

He glanced along the narrow street. Bedford Creek, Pennsylvania, spread up a narrow cleft in the mountains from the river. Its frame houses climbed the hillside in steps, as if they'd been planted there.

Ellie Wayne's craft shop was on the lowest street, along with the police station, a few other small shops, and a scattering of houses. Opposite it, the park spread along the flood-prone land by the river. His practiced engineer's eye automatically noted the water level, higher now from the frequent rain than was usual for August.

The craft shop, the lower floor of a frame house, had been a newsstand when he was a boy, when Bedford Creek was a sleepy backwater where nothing ever happened. Then some energetic citizens had decided to capitalize on turn-of-the-century architecture and wooded mountain scenery.

Since then, like much of the town, the shop had been transformed into a quaint attraction for the tourists who deluged the village during the summer and fall. He stepped around a man with a camera, dodged two women laden with shopping bags, and stopped.

Ellie Wayne had an eye for display, he'd give her that. An artfully draped quilt brightened the shop window, surrounded by handwoven baskets and dried-flower wreaths in colors that picked up the quilt's faded earth tones. A yellow stuffed cat snuggled into a needlework cushion.

He'd planned his visit for closing time on this busy summer Saturday, hoping to catch her alone after the last of the shoppers left. He didn't want any eavesdroppers on the conversation he was about to have.

He took a breath, tried to curb his impatience and reached for the door. A bell jangled, and the cool, dim interior invited him in. The woman behind the worn oak counter glanced up, her brown eyes registering his presence. But she wasn't alone yet. Two last-minute customers fingered a quilt that was spread across the counter, peppering her with questions.

He moved behind a display table heaped with woven tablecloths and inhaled the faint, spicy aroma of dried flowers. Every inch of the tiny shop displayed something-his first impression was clutter; his second, coziness.

He intercepted a questioning glance from Ellie Wayne and pretended interest in a stack of handmade baskets, tamping down his irritation.

"I'll be with you in just a moment." Her voice was as welcoming as the shop.

"No hurry." He forced cordiality into his tone. "I can wait." He could wait. When he talked to her, he wanted the woman's undivided attention.

Undivided attention--that was also what his mother and his six-year-old daughter wanted from him. They'd been reluctant to let him out of their sight since he arrived home yesterday, as if fearing he'd disappear back to the Corps of Engineers project that had occupied him for so long.

Too long, he realized now, far too long. It had been too tempting to bury himself in work after Julie's death, too easy to convince himself that Kristie was better off living with his mother in this comforting, safe place where nothing ever changed.

He gripped the oblong basket he'd picked up. Things had changed, and if he'd been a better father, a better son, he'd have realized that. Bedford Creek wasn't a safe little backwater any longer. The tourism boom had brought strangers to town--strangers like Ellie Wayne and her father.

He glanced toward the woman. Maybe it wasn't entirely fair to describe her as a stranger. She'd opened her shop four or five years ago, and he must have seen her playing the organ on his few visits home. But it was only in the last few months that Kristie had begun talking about Ms. Ellie so much, and even more recently that her innocent chatter had paired Grandma with Charles Wayne. And then his sister Rebecca had called, concerned about their mother's infatuation for a man she'd just met, and he'd known it was time to come home.

The customer produced a credit card. Apparently the transaction had been successful. Ellie smiled as she folded the quilt, her hands lingering as if she hated to part with it. A neat salesperson's gimmick, he decided. She probably hoped to sell them something else.

He assessed the woman, trying to look at her without preconceptions. Slim, tall, probably about thirty or so. A wealth of dark brown hair escaped from a woven headband to curl around her face. There was nothing conventional about Ellie's looks. Her face was too strong, her coloring too vivid, with those dark expressive eyes and the natural bloom in her cheeks.

Nothing conventional about her clothing choices, either. Today she wore a long skirt and an embroidered blouse that would look more at home in an artists' colony than in Bedford Creek. He shouldn't let that quick impression prejudice him against her, but he couldn't deny the feeling. She looked as if she didn't belong here.

The bell jangled as the customers went out, and he tensed. Ellie Wayne was an unknown quantity as far as he was concerned. He didn't want to do battle with her, but he would if he had to.

She came toward him with the quick, light step of a dancer. "I'm sorry I kept you waiting. May I help you with something? I have those with different colors of reed woven in."

He glanced down at the basket he'd nearly forgotten was in his hands. "I'm not shopping."

Her eyes widened as if he'd insulted her wares, and he reminded himself he'd intended to be diplomatic. "It's very nice," he added, putting it down.

Faint wariness showed in those expressive dark eyes. Maybe it was her eyes, maybe it was the ethnic flavor of her clothing, but a thread of song wound through his thoughts, its lyrics warm and yearning, something about a brown-eyed girl. He shoved the distraction away.

"Then what can I do for you?" she asked.

"I'm here about my mother." She still looked at him blankly, of course. She didn't know him from Adam. "I'm Quinn Forrester. Gwen's son."

"Quinn?" Her voice lilted with surprise. If he expected guilt, he didn't get it. "Gwen didn't tell me you were coming home."

It was almost as if she should have been informed, and irritation flickered through him. "Does she tell you everything?"

"I didn't mean that." Warm color rose in her cheeks. "I'm just surprised she didn't mention it."

"Especially since you see so much of each other." He didn't intend the words to sound accusing, but they did.

She stiffened, apparently sensing his attitude. "Your mother and I are co-chairing a craft show next month for the church." She said it carefully, as if weighing each word. "So we have been seeing a lot of each other lately."

"It's a little more than that, isn't it?" He wasn't going to dance around the subject any longer. It was time the woman leveled with him. "The way I hear it, your father's the one who's spending a lot of time with her."

He couldn't be mistaken about her reaction to that--a flash of fear. She masked it, but not quickly enough.

Determination hardened inside Quinn. His father would have expected Quinn to protect his mother, not to bury himself in his own grief. But he hadn't, and now it looked as if Gwen Forrester, with her naïve belief in people and her tempting little nest-egg, was falling prey to a charming drifter who had no visible means of support and a murky background. Well, not if he could prevent it.

"I don't know what you mean." Her sudden pallor gave the lie to the words.

He shook his head. "I think you do. I want to know what's going on between my mother and your father."