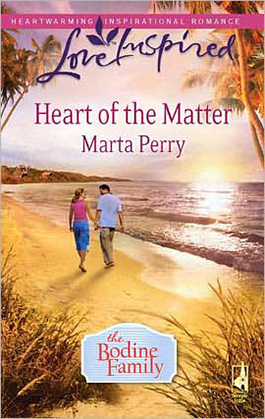 Amanda Bodine’s new boss is so...bossy! The hard-nosed newspaperman will only assign reporter Amanda fluff pieces about dog shows. She longs to prove herself with a serious front-page story. But then her own family becomes newsworthy. Suddenly, Ross Lockhart is sitting beside her at Sunday dinner, interviewing her relatives. And he almost seems like part of the family.

Until she realizes that Ross is after information that will tarnish the Bodine name. Risking her own future, Amanda sets out to teach her boss about the real heart of the matter: love.

Amanda Bodine raced around the corner into the newsroom and skidded to a halt. Her usually neat, workman-like desk bloomed with a small garden of flowers. Above it floated a balloon bouquet with a streamer that fairly shouted its message. Happy Birthday. Her heart plummeted to the pit of her stomach.

She glanced at her watch. Two minutes until the editorial meeting. If she could just get everything out of sight....

“Ms. Bodine.” The baritone voice dripped with sarcasm, and she didn’t have to turn around to identify the speaker—Ross Lockhart, managing editor of the Charleston Bugle. “It seems your personal life is intruding into the office. Again.”

“I’m sorry.” She forced herself to turn and face the man. Drat it, she never had trouble standing up for herself in any other circumstances. Why did her grit turn to jelly in the presence of Ross Lockhart?

Because if you get in his way, he’ll mow you down like a blade of grass, her mind promptly responded.

“Get rid of it. Please.” The addition of the word didn’t do a thing to mitigate the fact that it was an order. “Editorial meeting, people.” He raised his voice. “Conference room, now.”

A rustle of something that might have been annoyance swept through the newsroom, but no one actually spoke up. No one would. They were all too aware that hot shot journalist Ross Lockhart had been brought in by the Bugle’s irascible owner and publisher, Cyrus Mayhew, to ginger things up, as he put it. Lockhart seemed to consider that a mandate to fire anyone who didn’t meet his exacting standards.

Lockhart stalked away in the direction of the conference room before she found it necessary to say another word to him. Good. She had just come from a birthday lunch at her favorite waterfront restaurant with her twin sister and her cousins, all of whom had unanimously urged her to stand up to the man, for goodness’ sake!

That was all very well for them to say. Their careers didn’t depend on his goodwill.

She moved two baskets of roses and daisies to the floor behind her desk and grabbed a notebook to join the exodus from the newsroom.

“Happy birthday, sugar.” Jim Redfern, the grizzled city desk editor, threw an arm around her shoulders in a comradely hug. “Too bad you have to spend it in another meeting.” His voice lowered. “Sittin’ around a table doesn’t get a paper out. You’d think the man would realize that.”

“He realizes Cyrus expects him to turn us into number one, that’s what.”

Jim snorted. “Not going to happen in my lifetime.”

Nor in hers, probably. Everyone knew that the venerable Post and Courier, the oldest newspaper in the South, was Charleston’s premier paper. The best the Bugle could hope for was to break a surprise story once in a blue moon.

And keep ‘em honest, as Cyrus was prone to say. Everyone who worked at the paper had been treated to his lecture on the importance of competition in the news. He’d probably like to believe his staff shared that passion.

Entering the high-ceilinged, wood-paneled conference room, Amanda glanced around the table, assessing her colleagues. Cyrus’s hope seemed unlikely to be fulfilled. His staffers were either just starting out, hoping this experience would lead to a more important job down the road, or they were old-timers like Jim, put out to pasture by other, more prestigious papers.

Except for Ross Lockhart, the exception to the rule—smart as a whip, newspaper-savvy, and ambitious. Above all, ambitious.

Lockhart took his place at the head of the long rectangular table, frowning as usual when he looked at them. He probably found them a pretty unprepossessing bunch compared to the company he’d kept at the Washington, DC, daily where he’d worked before a public scandal had nearly ruined his career.

She sat up a bit straighter. Maybe they weren’t the brightest tools in the tool chest, as her daddy might say, but at least they hadn’t fabricated a front page story, as Lockhart had been accused of doing. And it must have been true, since the paper had made a public apology to the congressman concerned and promptly fired Ross Lockhart.

Lockhart’s piercing gray gaze met hers almost as if he’d heard her thoughts, and her throat went dry. Juliet Morrow, the society editor, romantically claimed he had a lean and hungry look, like some crusader of old. The contrast between the steel gray of his eyes and the true blue-black of his hair, the angular lines of his face, the slash of a mouth—well, maybe she could see what Juliet meant.

But the look he’d turned on her was more that of the wolf, eyeing Little Red Riding Hood. She was already sitting near the end of the table. It was impossible to get any farther away from him. Only the obituary writer was lower on the totem pole that she was. She held her breath until his gaze moved on.

He began assigning the stories for the next news cycle. Knowing perfectly well he wouldn’t have anything remotely important for her, she fixed her gaze on a framed Bugle front page that announced VE day and let her thoughts flicker again to that birthday lunch.

She and her twin were thirty today. Annabel was well and truly launched on the work that was her passion. The others around the table, more or less the same age, were all either soaring ahead in careers or busy with husband and family. Or both. Only she was entering her thirties stuck in a job where her prospects grew dimmer every time her boss looked her way.

Which he did at that moment. She stiffened. Was there another dog show coming to town that needed her writing talents?

“Bodine.” His tone had turned musing. “Seems to me I’ve heard that name lately. Something connected to the military, wasn’t it?”

Panic gripped her throat so tightly she couldn’t make a sound. Was this the way it would come out—the secret the family struggled to keep in order to protect her grandmother? Right here in the newsroom, in front of everyone, blurted out by a man who had no reason to care who it hurt?