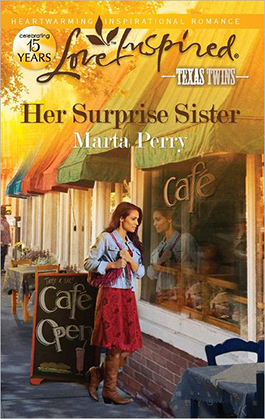 Imagine her shock when Violet Colby discovers she has an identical twin sister she never knew existed. Why her family was torn apart remains a secret no one can answer—yet.

Hoping to develop a sisterly bond, Violet invites her sophisticated city twin to the Colby Ranch in tiny Grasslands, Texas. But when her sister's former fiancé arrives with questions of his own, country girl Violet finds herself drawn to handsome businessman Landon Derringer. And learns that true love requires faith—and a heart as big as Texas.

What could she possibly say to a father who had walked out of her life when she was an infant? Hi, Dad, it's me, Violet?

Violet Colby's fingers tightened on the steering wheel. What was she doing miles from home in Fort Worth, trying to follow an almost nonexistent clue to her birth father?

A sleek sports car cut in front of her SUV, horn blaring. Shaken, Violet flipped on the turn signal and pulled into the right lane. City traffic had frazzled whatever nerves she had left.

A coffee-shop sign ahead beckoned to her. That was what she needed—a short respite, a jolt of caffeine and a chance to reassess her situation.

She found a parking space, fed the meter and pushed open the coffee shop's glass door, fatigue dragging at her. The aroma drew her irresistibly in, and a few moments later she was sitting at a small round glass table, a steaming mug and a flaky croissant in front of her. She hadn't bothered to read through the long list of specialty coffees the shop offered. All she wanted was caffeine, the sooner the better.

A woman brushed past her, the summer-print dress and high platform sandals she wore making Violet uncomfortably aware of her faded jeans and scuffed cowboy boots. It wasn't that she hadn't been in Fort Worth before, but she usually took the time to dress appropriately for a trip to the city, a five-hour drive from the Colby Ranch. This time she'd bolted out of her mother's hospital room, exhausted from long nights of waiting and praying for her mom to open her eyes.

She hadn't been able to take it any longer. That wasn't the Belle Colby everyone in the county knew, lying there motionless day after day. Belle Colby was energetic, vibrant, always in motion. She had to be, running a spread the size of the Colby Ranch and raising two kids on her own.

Not now. Not since her mare had stepped in a hole, sending Belle crashing to the ground. And Jack, Violet's big brother, was so eaten up with guilt for arguing with their mom before the accident that he was being no help at all.

Violet broke a corner off the croissant and nibbled at it. Her family was broken, it seemed, and she was the only one who could fix it. That's what she'd been thinking during those lonely hours before dawn at her mother's hospital bed. The only solution her tired brain could come up with was to find their father—the man Belle never talked about.

Now that she was here in Fort Worth, where she'd been born, the task seemed futile. Worse, it seemed stupid. What would it accomplish if she did find him?

She didn't belong here, any more than the sophisticated-looking guy coming in the door would belong on the ranch. Swanky suit and designer tie, glossy leather boots that had certainly never been worn to muck out a stall, a Stetson with not a smudge to mar its perfection—he was big-city Texas, that was for sure.

That man's head turned, as if he felt her stare, and she caught the full impact of a pair of icy green eyes before she could look away. She stared down at her coffee. Quickly she raised the mug, hoping to hide her embarrassment at being caught gaping.

It didn't seem to be working. She heard approaching footsteps and kept her gaze down. A pair of glossy brown boots moved into her range of vision.

"What are you doing here?"

Violet looked up, surprised. "What?"

"I said, what are you doing here?" He pulled out the chair opposite her, uninvited, and sat down. "I told you I'd be at your apartment.." He slid back the sleeve of his suit to consult the gold watch on his tanned wrist. "In five minutes. So why are you in the coffee shop instead of at your condo? Are you trying to avoid me?"

Okay, he was crazy. That was the only answer Violet could come up with. She groped for her bag, keeping her eyes on his face. It looked sane enough, with a deep tan that made those green eyes bright in contrast, a square, stubborn-looking jaw, and a firm mouth. His expensively cut hair was sandy blond.

He didn't look crazy, but what did that mean? Or maybe this was his idea of a pick-up line.

Her fingers closed on her bag and she started to rise. His hand shot across the table and closed around her wrist. Not hard, but firmly enough that she couldn't pull away without an undignified struggle.

"The least you can do is talk to me about it." He looked as if keeping his temper was an effort. "Whatever you think, I still want to marry you."

Violet sent a panicked glance around the coffee shop.

The customers had cleared out and even the barista had disappeared into the back. People walked by on the sidewalk outside, but they were oblivious to the drama being played out.

Her own temper spiked. "Well, what? Are you crazy?" That probably wasn't the smartest thing to say, but it was what she felt. "Let go of me right now before I yell the place down."

His grip loosened and he looked at her, puzzlement creeping into his eyes. "Maddie? Why are you acting this way? What's wrong?"

Relief made her limp for an instant. He wasn't crazy. He'd mistaken her for someone else.

A flicker of caution shot through her relief. If this someone else was a woman he'd proposed to, how could he mistake Violet for her?

"My name isn't Maddie." She said the words in a soft, even tone, the way she'd speak to a half-gentled horse. Maybe it worked on humans, too. "I think you've confused me with someone else."

His fingers still encircling her wrist loosely, he studied her, letting his gaze move from her hair, probably escaping from the scrunchy she'd put on her ponytail ages ago, to a face that was undoubtedly bare of makeup at this stage of the day, to her Western shirt and well-worn jeans.

Finally he shook his head. "You're not Maddie Wallace, are you?"

"Wait." He made a grab for her wrist again, and then seemed to think the better of it when she raised her fist.

"I'm sorry." He gave her a rueful, disarming grin. "You must think I'm crazy."

"The thought did cross my mind." A smile like his could charm the birds from the trees. Maybe it was worth sitting still another minute for. She had to admit, she was curious.

"It's uncanny." A line formed between his eyebrows. "But I think." He let that sentence fade away. "Look, my name is Landon Derringer. Here's my card." He slid a business card from his pocket and put it on the table in front of her. According to the card, Landon Derringer was the CEO of an outfit called Derringer Investments.

Of course, that didn't prove anything. "Not that I'm skeptical, but I could have a business card made up that said I was the queen of England."

He chuckled, the sound a bass rumble that seemed to vibrate, sending a faint tingle along her skin. "Fair enough. But if you'll be patient for a few minutes while I make a call, I think you'll find it worthwhile."

She gave him an assessing gaze. Her brother would probably say she was naive to trust this guy, but then Jack and everybody else at Colby Ranch tended to treat her as if she were about ten. Oddly enough, that decided it for her.

The guy—Landon—gave a crisp nod. "Good." He flipped open a cell phone.

In normal circumstances she would think it impolite to listen to someone else's phone conversation. But nothing about this encounter was normal, and she intended to hear what he said. This encounter had one thing going for it: it had taken her mind off her troubles, at least briefly.

"Maddie? This is Landon. Just listen, will you?"

This Maddie person must not be eager to talk to him, judging by his tone.

"I'm over at the Coffee Stop, and there's someone here you have to meet. I think she might have some answers about that odd package you received last week."

He paused while she talked, and Violet could hear the light notes of a female voice, but not the words.

"No, this is not just an excuse to see you." He sounded as if he were trying to hold on to his patience.

More waiting, while the voice went on.

He clicked off, and then met Violet's raised eyebrows with another flash of that smile. "Five minutes. It won't take her any longer than that to get here. Her apartment is just down the street a block or so. And you'll find meeting her interesting, I promise."

She glanced at her watch. "Okay. I'll give you five minutes, no more."

"Good." He rose, taking her coffee mug. "I'll get you a refill. And you look as if you could use something a little more substantial than that croissant."

But he'd already gone to the counter. She was tempted to pull out a mirror and look at herself, but that would betray the fact that she cared what he thought. Anyone would look frazzled after as many sleepless nights as she'd had.

She glanced at her watch again as he came back with the coffee.

"Still timing me?" he asked, sitting down.

"No. I was just thinking that there's a call I should make soon." She'd have to check in at the hospital to see if there'd been any change. And try to track her brother down, if she could.

He might be making an effort to be accommodating. Or he might be interested in who she was calling. She hadn't quite made up her mind yet about Mr. Landon Derringer.

"I'll wait until I've seen your mysterious friend," she said.

He glanced at the door. "You won't have long to wait. She's here."

The door swung open and a woman stepped inside. Slim, chic, sophisticated. And other than that, Violet's exact double. Violet's breath stopped. It was like being thrown from a horse, the wind knocked out of her. This couldn't be true, but it was. The evidence stood right in front of her.