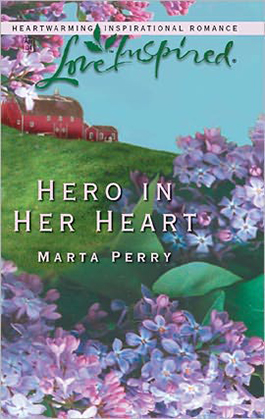 Nolie Lang learned at an early age that animals wouldn't let her down like people did. Her farm was a haven for abandoned anivals and a source of hope for the disabled. But now, to get a crucial grant, Nolie had to work with the most stubborn man she'd ever met, injured firefighter Gabriel Flanagan.

Though Gabe clearly didn't want to depend on anyone, including God, he and Nolie became reluctant partners. And all too soon the courage she witnessed in his actions disarmed her. But his injury had convinced Gabe he had nothing to offer. Could God now make Gabe see he'd always be a hero in her heart?

Nolie Lang stared at the elderly philanthropist who'd just held out her heart's desire to her and then attached conditions.

"I'm sorry." She probably sounded like an idiot, but that was how she'd felt since the moment she'd stepped into the plush offices of the Henley Foundation. "What did you say?"

Samuel Henley, beaming all over his rosy, wrinkled face, looked like one of Santa's elves. Unfortunately he didn't sound like one. "I said we have the perfect test case to determine if your project is worth funding by the foundation." He gestured toward one of the two men sitting opposite her. "I'm sure you've heard of Gabriel Flanagan, our city's firefighter hero."

Nolie looked. Well over six feet of glowering firefighter glared back at her. Gabriel Flanagan didn't seem to be any more enthusiastic about this than she was.

"Yes, of course I have." Flanagan's picture had been in all the newspapers a month or two ago, when he'd been injured while rescuing several people from a burning warehouse. "But I didn't realize Mr. Flanagan's injuries required the services of a seizure dog."

She couldn't miss Flanagan's reaction to that comment, even though she was usually better at reading animals than people. Without saying a word, he rejected what she'd said completely.

He resembled nothing so much as a dog with its hackles raised. Flanagan was an Irish name, but Gabriel wasn't remotely like an Irish setter. He was more of a bull mastiff-big, guarded, wary, and vaguely threatening.

The silence was stretching too long. She, Henley, and the man who'd been introduced as Suffolk's fire chief all seemed to wait for a response from Flanagan. It didn't come. He looked like a proverbial horse that had been led to water but refused to drink.

The fire chief planted beefy hands on equally beefy knees and leaned forward. "Gabe got a head injury in the accident." He slid a sideways glance toward the man. "We're sure he'll recover and be back on the job in no time, but he has had a couple of-" He hesitated, searching for the word. "--episodes."

"Seizures." Flanagan's voice was a ferocious bass rumble, like the threatening growl before a volley of barking. "Call it what it is. I had three seizures."

Seizures weren't that unusual after a head injury. "When was the most recent one?" She ventured the question and was rewarded with a flash of barely controlled fury in eyes so deep a blue that they were almost black.

"Two weeks ago." He spit the words out. "That doesn't mean anything. I'm getting better all the time. I don't need some kind of a guide dog to help me."

"Seizure alert dog. Or service dog." She made the correction automatically, and then wished she hadn't. Flanagan looked as if it would give him great pleasure to rip her head off.

She couldn't really blame the man. He was obviously in complete denial, which hardly made him a good candidate to convince the Henley Foundation that they should sink a ton of money into saving her service animal program.

She planted her feet more firmly in plush carpeting that seemed to reach to her ankles. The navy blazer and white shirt that had seemed appropriate when she'd left the farm now resembled rummage sale leftovers. She inhaled. The office even smelled like money.

I don't belong here, Father, but you know I'll do whatever it takes to help Your little ones.

You can't. Aunt Mariah's voice had rarely echoed in her head in recent years, and now was certainly not a good time for it to start. You're worthless. Always were, always will be.

She'd found her own way of dealing with that bitter voice over the years. I am a child of God, valuable in His sight.

The words gave her the assurance to face anyone, including eccentric millionaires and angry firefighters.

She cleared her throat. "If Mr. Flanagan is opposed to this, perhaps we could find another client to prove the worth of my program to the foundation."

Henley's rosy face crumpled, as if he were a toddler whose promised ice cream cone had been snatched away.

"Nonsense." The chief's voice boomed. "Of course Flanagan wants to do this. He can't wait to get started." He shot Gabe a look that demanded agreement.

Obviously Chief Donovan had no intention of offending the man whose generosity to the city of Suffolk, Pennsylvania was legendary. Well, she didn't want to offend Henley either. She wanted him to come forth with the grant for Nolie's Ark that would give many more people service dogs to make their lives easier.

She suppressed a flicker of panic. With the rising taxes on farmland, how much longer could she keep going if the foundation didn't help?

"Yes." Flanagan ground out the word. If his square jaw got any tighter, it might break. "I'm willing to cooperate."

They were the appropriate words, but every line of his tense body said cooperation was out of the question.

Nolie's heart sank. She couldn't hope to convince the foundation that her program worked if her test case were determined to reject everything she had to offer.

"That's good." She tried to pretend she believed him. She focused on Henley across the barricade of the desk. He was the one she had to convince, not Flanagan. "But as you know, my work is primarily with children. I'm not sure that Mr. Flanagan is the best candidate."

"You do work with adults, too." Henley put a manicured hand on the navy folder in which she'd submitted her proposal. The cheap folder looked out of place on the expanse of polished mahogany. "You mentioned that in your application."

She was going to have some fierce words for Claire. Her best friend had been airily sure that convincing Henley she deserved the grant would be a snap. Maybe it would be, for someone as polished and savvy as Claire.

Unfortunately plain old country girl Nolie Lang was the one who had to do the convincing.

"Pairing a seizure dog with a client depends on the rapport between client and animal. That's easier to achieve with a young client."

Was she beginning to sound desperate? That was how she felt, but desperation probably wasn't the best feeling to convey if she expected the man to fund her work.

"Gabriel Flanagan is the foundation's choice."

She caught the glimpse of steel in Henley's rosy face. The implication was clear. This would be done his way or not at all.

For a moment she didn't seem to see the elegant office with its wide windows looking out on the centuries-old city square. Instead she saw her farm, her animals, and the people she could help with this money. Especially the children she could help.

She forced a smile. "If that's how you feel about it, I'd be happy to work with Mr. Flanagan."

She couldn't help but glance in the firefighter's direction. He glared back at her, as if furious that she'd agreed.

Her own anger sparked. If Flanagan didn't want to do this, he was the one who should speak up.

"Excellent," Henley said, rubbing his palms together in pleasure. "I'm delighted you both see it my way."

As if either of them had a choice in the matter. Well, she'd try, but she had a bad feeling about what Flanagan was bringing to the situation.

"Now tell me," Henley went on. "How do you usually begin work?"

Maybe it would be better not to let her gaze stray toward Gabe Flanagan. "Ordinarily I visit the client's home first, but-"

"Good." Chief Donovan planted his hands on the arms of his chair, as if ready to have this meeting over. "Gabe needs a ride, so you can drive him home now. That way you can meet all of the Flanagans at once."

His tone made it sound as if that should be a real treat for her. Her apprehension grew. She wasn't much good with families, and she didn't suppose the Flanagans would be any different.

"Fine." Henley got to his feet, seeming to take her agreement for granted. The rest of them followed suit. Apparently the audience was over. She turned toward the door, not looking forward to the moment when she'd be alone with Gabe Flanagan.

She swung back around, apprehension a hard ball in her stomach.

A ray of afternoon sunlight made Henley's white hair glisten. "We have to set a deadline, of course. Suppose we say one month from today. You can report back to us, and we'll make a final decision about the grant." He beamed. "I'm sure we'll all be pleased with the results."

The expensive office shimmered in front of her eyes. One month. One month to successfully pair a service dog with a man who looked as if he'd rather do just about anything than come anywhere near her and her program.

She squared her shoulders, reaching deep for confidence. Her work deserved the support of the Henley grant. She had to believe that if she were to make a difference.

Like it or not, Gabe Flanagan was essential to her success. That meant she had to make the man cooperate, whether he wanted to or not.