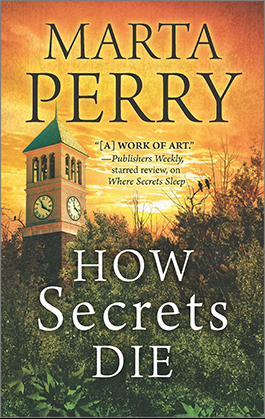 As Laurel Ridge embraces a stranger hungry for answers, a sinister truth is awakened

A hard-hitting reporter, Kate Beaumont unearths the deepest lies and brings harsh truths to light. But the story that lures her to the gentle town of Laurel Ridge, Pennsylvania, is closer to her heart than anyone knows. The details of her half brother's sudden death have never made sense. She owes him justice, yet the one man who can help her is the stubborn sheriff she can't stand.

Protecting his town is Mac Whiting's top priority. Everything else—including pacifying a beautiful crusader on a mission best left resting in peace—is secondary. But as Kate's search embeds her in his world and attracts a skilled criminal, she needs Mac's protection. Drawn together by deadly secrets, they must find a way to trust each other before a killer silences them both.

A cemetery should be a place where people were buried—not where they died. Kate Beaumont, confronted so unexpectedly with the place Jason had chosen to end his life, stopped the car in mid-traffic, earning an irritated honk from the driver behind her as he was forced to come to a halt as well.

The driver circled her, looking annoyed but refraining from the rude gesture she anticipated. Apparently drivers were a bit more polite in a small town like Laurel Ridge, Pennsylvania, than they were in the city. Her hands were shaking, and not from the sudden stop. She pulled off the road near the stone wall that encircled the cemetery.

Ridiculous, to let just the sight of the place send her into a tailspin. She was tougher than that, wasn’t she? But while she could face down a recalcitrant politician or an irate citizen while in search of a story, she couldn’t maintain that level of detachment where her younger brother’s death was concerned.

Kate took a long breath, fighting to still the tremors that shook her. She focused on the scene facing her, assessing it as she would when thinking of the word picture she’d create for a newspaper article. Laurel Ridge’s cemetery covered the top of a rounded hill at the eastern end of town. Spreading maples, their leaves already turning color, shielded gray tombstones. Some of the stones were worn and tilted, their lettering eroded, but the whole place had a well-tended air, the grass mown, beds of gold and burgundy chrysanthemums blossoming here and there.

Which was the stone Jason had leaned against when he’d taken that fatal dose? She could find it, she supposed, since the name had shown clearly in the newspaper photo she’d scanned online. But looking at the spot wouldn’t lead her to any answers.

Movement reflected in the rearview mirror startled her, and her stomach tightened as she realized a police car had pulled up behind her. Great. All she needed was to draw official attention to herself before she’d even begun her task.

An officer slid from the vehicle and started toward her. Taking a firm grip on her nerves, Kate planted a smile on her face and hit the button to roll down her window.

She was about to speak when a closer look at the man’s uniform gave her another shock. M. Whiting, the lettering on his pocket read. McKinley Whiting, then. Chief of Police in this backwater town, and the man who’d dismissed her little brother’s death as just another druggie overdosing himself.

Kate gritted her teeth, fighting to keep her feelings from showing in her face as she looked up at the man. Tall and lean, he had dark hair in a military-style cut and a jaw that spoke determination. He didn’t affect the dark sunglasses so many cops did, and his brown eyes studied her, missing nothing, she felt sure.

“Are you having car trouble, ma’am?” His voice was a bass rumble.

“You can’t park here.” He nodded to the No Parking sign directly in front of her fender. “If you’re interested in the cemetery, you can turn in at the gate just ahead. You’ll find a gravel pull-off where you can park if you want.”

“I don’t.” Kate’s tone was sharper than she intended, but she couldn’t seem to control the spurt of temper. “Can’t a visitor to your town stop to get her bearings without being harassed?”

Reading the surprise in his face, she clamped her lips shut before she could make matters worse. She’d overdone it—lost her cool and let her feelings show. The last thing she wanted was to raise the suspicions of the local cop before she’d been in town for five minutes.

“Sorry,” she muttered before he could speak. “I didn’t mean…”

“No problem.” He said the words easily, but his brown eyes were watchful. “I wasn’t trying to harass you. If you’re lost, I’ll be glad to help you find your way, Ms.…”

He left it hanging there, obviously intent on learning her name. Well, at least it wouldn’t connect her with Jason Reilley.

“Nice to meet you, Ms. Beaumont. I’m Mac Whiting.” She could see him stowing her name away in the filing cabinet of his mind. “Coming to visit someone here in Laurel Ridge?”

“No.” Guilt and grief was a powerful combination. She should have. If she’d come to visit Jason the summer he’d spent here, maybe he’d still be alive.

That was the danger of loving someone. It hurt too much when you let them down.

Whiting’s eyes were probing again. If she’d worn a sign, she probably couldn’t have been more obviously hiding something.

She swallowed hard and tried for a normal tone. “I’ve been driving for several hours. I just thought I’d find a place for lunch.”

He nodded, again with that watchful look. Protective, that was what it was. As if his town might need protecting against her.

“Turn left just ahead, and you’ll be on Main Street. There’s a café a few blocks down on your left, across from the Bed and Breakfast.” He pointed, leaning against the car as he did so, and she had a sudden sense of masculine power in his nearness. “I can vouch for the food, and the prices are reasonable.”

She hadn’t expected that casual reference to the Bed and Breakfast, and it shook her. Would it be the same one where Jason had stayed when he came to Laurel Ridge? If so, it was going to be one of her first stops.

“Okay, thanks.” She managed a cool, dismissive smile. “I appreciate the recommendation.” She turned the key, her fingers brushing the silver dragon charm Jason had given her, and put her finger on the window button.

Whiting looked at her for a moment longer, and then slowly stepped back so she could close the window. She put the car in gear, glanced behind her, and pulled out. Whiting was easy to see in her rearview mirror. He’d pulled out a notebook and was jotting down her license number.

She doused a flicker of anger. A search of her license wouldn’t tell him anything except her address in Baltimore. She’d never been arrested, so a query to the police there wouldn’t help him, even if he went that far.

But this encounter had clearly shown her that she’d have to do better. True, she hadn’t expected the first person she’d meet in Laurel Ridge to be the policeman who’d been quoted in that article about Jason’s death. She might be excused for losing her grip just a bit, but it was unfortunate. She’d raised his suspicions before she’d had a chance to do a thing.

But what difference did it make in the long run? Sooner or later she’d have to divulge the relationship between her and Jason. If she didn’t, she’d have no reason for asking questions about him. She’d toyed with the thought of claiming to be writing a newspaper story about Jason’s death, but that didn’t sound credible even to herself, not after over a year had passed.

Kate made the turn onto Main Street and drove down it at a sedate speed, reading signs as she went. There, ahead of her on the left, was the café Whiting had mentioned, and on her right the Bed and Breakfast. She slowed, peering toward the rear of the white clapboard building, and caught a glimpse of a small building nearly hidden by the trees. That had to be it—the cottage where Jason had lived during his three months in Laurel Ridge.

She hadn’t been here when Jason had needed her, but she was now. She’d find the answer to the question that haunted her, because if she didn’t, she’d never be satisfied. What had happened in this seemingly quiet, peaceful town that had led to her brother’s death?