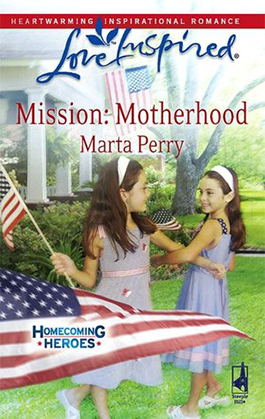 Homecoming Heroes: Saving children and finding love deep in the heart of Texas.

Overnight, Caitlyn Villard becomes mother to twin five-year-olds. Her darling nieces are orphaned, their parents fallen soldiers. So Caitlyn trades New York City for Prairie Springs, Texas, the small military town she’d run from at first chance. Loving the girls is easy. Learning how to be a slow-paced soccer mom is not. Which is where handsome army chaplain Steve Windham steps in. Just in time to show Caitlyn that sometimes you find the man—and the life—of your dreams where you least expected.

It had taken ten years in New York City to eliminate all trace of Texas from Caitlyn Villard’s voice. It had taken only a week in Prairie Springs to bring it back again.

Caitlyn stepped out into the courtyard of the Prairie Springs Elementary School, to be greeted by a blast of air hot enough to wilt her hair style and melt the make-up from her face. Had she really just said y’all to the kindergarten teacher and her twin nieces? Surely that was impossible.

She looked up. A lanky man clung to the top of a wooden stepladder, a paint can in one hand and a dripping brush in the other. “You might want to move out of range a bit.”

“Sorry.” She took a few steps away. The concrete bench looked sizzling, so she stood under the shade of the roof overhang. She had obviously forgotten just how hot it was in July in Texas.

She could see through the window into the kindergarten room, where Amanda and Josie sat at a round table with teacher Sarah Alpert, who would assess their readiness to start kindergarten in September.

It was two months to September. By the time the twins started school, she would be back in New York, picking up the threads of her interrupted life. Back on the fast track to success at Graham, Graham, and Welch, one of the Big Apple’s most prestigious law firms. This interval in Texas, helping her mother cope with the aftermath of her sister’s death, would be nothing but a memory.

“You brought the girls in for their first taste of kindergarten, did you?”

Caitlyn blinked, as startled as if the spindly potted shrub next to the door had made a personal remark. The painter had descended—tall, lanky, wearing the scuffed boots, blue jeans, western belt and ball cap that were almost a uniform here.

“I beg your pardon?” It was a tone designed to freeze unwelcome attention.

“The twins,” he said, as if she were a bit slow on the uptake. “I bet they’re excited about starting kindergarten in the fall.”

“Well, now, I reckon I’m just not as memorable as I thought I was.” He didn’t look as if he believed that, in spite of the aw-shucks expression he wore. He tipped the ball cap politely. “Steve Windham. Prairie Springs High School. Ring any bells?”

She had to dredge through memories she’d happily buried a long time ago. “Steve Windham. I guess it’s coming back to me. You were a senior when I was a freshman, I think.”

Actually she knew, but she didn’t intend to pander to the man’s self-conceit. He looked far too pleased with himself already.

She let her gaze wander over what had to be at least six feet or more of solid muscle. Steve had been the star athlete of his class, and he still looked it. He’d been the valedictorian, too, and probably voted most likely to succeed, she wouldn’t wonder.

“That’d be about right,” he agreed. “That was way too many years ago, I guess.”

“And after high school you became a housepainter, did you? I thought I remembered that you had an athletic scholarship to one of the big schools.”

That was typical of Prairie Springs. People just settled down to live the way their folks had, instead of getting out into the world and making a mark. Being a painter was fine, if that was what you really wanted, but it was hard to believe someone with Steve’s intelligence and talent hadn’t had any bigger goals.

Steve’s right eyebrow cocked, giving him a quizzical look. “I don’t guess there’s anything wrong with painting. It’s an honest day’s work. So what did Ms. Caitlyn Villard turn out to be?”

She hadn’t meant to insult the man, but maybe she had been a little judgmental. It wasn’t any of her business how Steve Windham spent his life.

“I’m an attorney with a firm in New York.”

That eyebrow lifted a little higher. “Only now you’re back in Prairie Springs again. Going to practice law here, are you?”

She hoped the horror she felt at that suggestion didn’t show on her face. And what on earth was she doing, standing here talking about her future with someone she hadn’t seen since high school and hadn’t known all that well then?

She managed what she hoped was a polite smile. “You’ll have to excuse me. I think the teacher is ready for me to come back in.”

He nodded, still with that faintly amused turn to his lips.

She hurried away, aware that he stood there, thumbs hooked nonchalantly in his belt. She could almost feel that intent blue gaze on the back of her neck.

Get out of Prairie Springs. That had been her only goal back in those high school days Steve seemed to remember so fondly.

Well, now she’d come full circle. Get out of Prairie Springs was her only goal now.