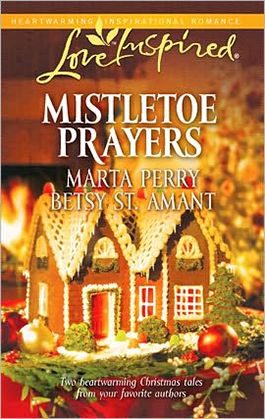 Home for the holidays...

Left at the altar on Christmas Eve, Annabel Bodine has lost her holiday spirit. When her big brother brings home handsome Coast Guard buddy Travis McCall, can she summon the courage to open her heart to love for the holidays–and maybe for a lifetime?

Lt. Travis McCall had never had what most people would call a merry Christmas, and it was the last thing he wanted this year. The glossy door of the Southern colonial house bore a huge Christmas wreath, and the sight was nearly enough to make turn tail.

Almost, but not quite. He’d promised his buddy, and he never went back on his word.

The moment’s hesitation proved just enough. A discordant bray pierced the air of the quiet Charleston suburb. He glanced toward the driveway which swept around the house and blinked. A horse trailer had been pulled there, its ramp down. On the ramp, all four feet planted firmly, stood a small gray donkey.

A lead rope disappeared into the back of the trailer. Someone, out of Travis’s sight in the trailer, was apparently trying to pull the donkey in. Just as plainly the donkey didn’t intend to go anywhere. Travis had loaded horses and cattle enough times as a kid to know the signs.

Even as he thought it, the animal jerked back. In a minute it would be free, running into traffic as likely as not. He’d have to go give that idiot a hand.

A few quick strides took him across the lawn. Just as he reached the ramp the donkey reared, yanking the lead rope. A slight figure hurtled out of the back of the trailer, stumbled on the ramp, and barreled into Travis.

He grasped it, mind registering several things at once. This was not a teenage boy, as his first startled glimpse had made him think. And the donkey, managing to free himself, bolted.

“Are you okay?” Grasping the woman under the elbows, he set her on her feet.

“Never mind me. Help me get that foolish beast before he gets himself hit by a car.” Even the sharpness of the command couldn’t deprive the woman’s voice of a soft Southern drawl, reminding him of Luke Bodine.

He let go of her. “I’ll get between him and the street.”

“Good. Don’t scare him.” Deep blue eyes were focused on the donkey, not sparing a glance for him.

“I’m not the one who lost him,” he reminded her. The donkey had dropped his head to crop at the grass. Travis moved a few steps to the side, to be in a position to intercept him if he should take a notion to head for the street.

The woman grinned, not taking offense at his words. “True enough. I thought the hay in the rack would be enough to tempt him in. Guess I was wrong.” She pulled a carrot from the pocket of her denim jacket. “Maybe this will do it.”

This obviously, had to be Annabel Bodine, Travis decided, watching as she crooned to the donkey, coaxing him with the carrot. Luke often talked about his twin sisters. Amanda was a reporter, while Annabel ran some kind of animal shelter.

Annabel, with her faded jeans, scuffed boots, and denim jacket, fit the part. Long blond hair was pulled back into a single heavy braid, and her heart-shaped face was innocent of make-up. The smattering of freckles on her cheeks made her look like a kid.

“There, now, you silly beast. Nobody’s going to hurt you, ever again.”

The donkey’s white muzzle extended toward the treat, and he sniffed cautiously.

If it were up to Travis, he’d have made a grab for the rope already, but he had to admit Annabel seemed to know what she was doing. She continued to talk softly to the beast as he chomped at the carrot, running her hand down his neck and finally taking hold of the rope.

“There now, that wasn’t so bad, was it?” She led him toward the trailer.

Travis moved in behind, ready to jump into action if the animal showed signs of trouble, but the donkey, apparently having decided this woman was a friend, moved into the trailer and began to eat hay as if that had always been his plan.

Annabel slipped out the side door of the trailer. Together they shut the tailgate.

“Sorry.” She looked up at him with a quicksilver smile that reminded him of his friend. “That wasn’t exactly the welcome we had planned for you. You’re Travis McCall, of course. I’m Annabel Bodine, Luke’s sister.”

She extended her hand, seemed to remember the donkey had been eating carrot from it, and wiped it on her jeans instead.

“I figured that. Luke said you worked with animals.” He glanced at the donkey as he spoke, and his eyes narrowed. “That animal has been abused.”

“Yes.” Sorrow deepened the blue of Annabel’s eyes. “That’s why he’s going home with me. It won’t ever happen again.”

He nodded, accepting her word. In his book, there wasn’t much worse than a man who’d abuse a helpless animal. Unless it was a man who’d do that to a child. He shut that thought away with a forcible slam.

Annabel brushed some gray fur from the sleeve of his dress blues. “Sorry again. But you didn’t need to get all dressed up to come see us, you know.”

“If I’m calling on a superior officer, I dress accordingly,” he said. The Bodines were a military family, from everything Luke had told him. Luke’s father was a senior officer at Coast Guard Base Charleston, where Travis had just been posted.

Annabel took his arm, her hand small and capable. “Come on, then. Let’s get you introduced to Mamma and Daddy. They’ll be thrilled you’re here. And I warn you, they’ll want to know every little bitty thing about what Luke’s been up to since he left here.”

She led him across the veranda and threw open the door, tugging him into a wide center hall. Could she sense his nervousness? If so, she seemed determined not to let him give in to it.

“Mamma! Daddy! He’s here!” She brushed the long braid of honey blond hair back over the shoulder of her denim jacket.

She glanced up at him, and again he noticed the spray of freckles across her cheeks. My tomboy kid sister, Luke had called her. She was that, but there was a grown-up appeal in those wide blue eyes and generous mouth.

He jerked his mind away from those thoughts. This was his buddy’s sister. And those were his parents, hurrying toward them from somewhere in the rear of the house.

He might prefer to spend his Christmas alone in his quarters, safe from people pitying him, but there was no getting away from it now. Like it or not, he’d be having this Christmas with the Bodine family.