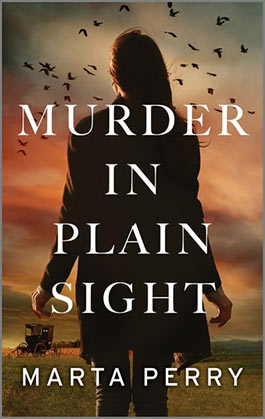 There are secrets buried in Amish country...

Did a sweet-faced Amish teenager brutally murder a young woman? To save her career, big-city lawyer Jessica Langdon is determined to defend him—against the community’s bitter and even violent outrage. Yet without an understanding of Amish culture, Jessica must rely on arrogant businessman Trey Morgan, who has ties to the Amish community—and believes in the boy’s guilt.

Jessica has threats coming from all sides: a local fanatic, stirred up by the biased publicity of the case; the dead girl’s boyfriend; even from the person she’s learned to trust the most, Trey Morgan. But just when Jessica fears she’s placed her trust in the wrong man, Trey saves her life. And now they must both reach into a dangerous past to protect everyone’s future—including their own.

“In Murder in Plain Sight Perry, with her deep knowledge of Amish culture, has crafted a dark, tangled, suspenseful tale that treats readers not only to a sweet romance and a seriously twisted villain but to welcome insight into the customs and beliefs of the Plain People.”
— Library Journal

“Murder in Plain Sight is a wonderful look into the Amish culture and how it clashes with the “English” world. Perry has created a novel that is one more of her “keep the reader on the edge of the chair” stories, with twists and turns and surprises.”
— Dr. J’s Book Place

SPRINGVILLE, PA—The body of a local woman was discovered early Sunday morning in a remote barn in rural Lancaster County. The woman, whom police say had apparently been beaten to death, has been identified as Cherry Wilson, 24, of Springville. Police have detained a young man who was found at the scene. Thomas Esch, 19, of Spring Township, son of a local Amish family, is being questioned in connection with the death. Police decline to say what the motive might have been in the grisly crime.

In what appears to be a related incident, an unidentified older woman was warned away from the suspect by police. She apparently attempted to interfere when the suspect was being taken into police headquarters. No further information about this incident has been released by the police spokesperson.

A summons to the office of Dwight Henderson, senior partner in the Philadelphia law firm of Henderson, Dawes, and Henderson, seldom resulted in good news for a junior associate, but Jessica Langdon didn’t intend to let her apprehension show. Assuming her most professional expression, she straightened her suit jacket with icy fingers, then tapped lightly and opened the door.

“You wanted to see me, Mr. Henderson?”

Henderson frowned across the expanse of a massive mahogany desk, balancing a gold fountain pen between his forefingers. He let the engraved pen drop to the desk top and nodded to the chair across from him.

The penalty box. That was how she’d thought of that seat recently. She sat, smoothly her skirt down over her knees.

Center city’s skyline, seen through a wide window, made an impressive backdrop, not that Henderson needed any help to impress. Over sixty, he had heavily-lined face that no expensive facial treatments could make resemble anything but a bulldog’s, a shining bald dome that reflected the light from the window, and a pair of remote, piercing dark eyes. Whatever his appearance said, he was a highly successful attorney whose clients could afford, and got, the best.

Jessica waited out the frowning silence that had such a demoralizing effect on reluctant witnesses on the few occasions when Henderson Senior deigned to appear in court himself. Henderson had summoned her. It was for him to speak first.

“Your time here has not been particularly successful, has it, Ms. Langdon?”

That didn’t seem to require an answer. Her heart sank. This was it, then. Termination. She tried not to think of her father’s reaction. A superior court judge tended to expect better of his only child.

“After the business with the Clements boy...”

The Clements boy, as Henderson called him, was the sixteen-year-old scion of one of the firm’s wealthiest clients, currently embarked on an escalating pattern of vandalism and violence. Her comment that perhaps he should for once have to face the consequences of his actions had not been well received.

“...to say nothing of your failure in the Altmiller matter...”

She had to bite her tongue at that. Dwight Henderson, Jr., had dropped the ball in that situation, but it had been made abundantly clear that her duty was to accept the blame and say nothing. Dwight Henderson’s son could not possibly have mishandled a case. Junior associates fell on their swords.

“...only my respect for your father has allowed...”

Her father, Theodore Belmont Langdon, Superior Court Judge and law school crony of Dwight Senior. His influence had secured this position for her, but it was apparently not enough to ensure that she stayed.

Henderson cleared his throat. “However, a case has come up which you’ve been requested to handle.” He shoved a file folder across the desk.

She was so astonished that his words took a moment to sink in. She picked up the folder by its edges. Some response seemed called for. “Yes, sir?”

“You’ll have to drive to Lancaster County immediately to deal with the matter. The Morgan family has decided to fund the defense for this unfortunate young man. Take your lead from them as to how to handle the case. It shouldn’t involve anything more complicated than negotiating a plea bargain.”

“That’s all, Ms. Langdon. Satisfy the Morgan family, and perhaps...”

He let that trail off, but she got the message. Perhaps we won’t be letting you go.

She’d like a little more information, but his peremptory gesture sent her to the door. She escaped, clutching the file to her chest. She’d have to trust that its contents could salvage the remnants of her career.

Face it—she was lost. Jessica glared at the GPS system that was supposed to get her wherever she needed to go. It worked fine in Philadelphia, or out on the interstate. Once she’d gotten entangled in a network of narrow roads that wound past neat farms and through patches of woods, the system seemed to get as lost as she was. At the moment, it blinked, its automated voice informing her that it was re-calculating the route. Unfortunately, it had been doing so for the past ten minutes.

She slowed the car, pulling off onto the graveled verge, and reached for a map. Since she didn’t know where she was, it seemed unlikely that the map would help her much. The last road sign she’d seen had marked an even narrower road than this one, called Creek Road. No Creek Road appeared on the map. It was undoubtedly one of the many thin, unnamed lines that wound through Lancaster County, presumably connecting the apparently endless patchwork of dairy farms.

Propping the map against the steering wheel, she tried to find the spot at which she’d gotten off the main road. Following her prospective employer’s directions so far had resulted in nothing but trouble. She could only hope that wasn’t a portent of things to come.

A noise behind her brought her head up. If she could flag down a car and ask for directions—

But it wasn’t a car. A gray-and-black buggy came into view over the gentle rise of the road behind her, seeming to fit into the pastoral surroundings far better than her year-old hatchback. The horse’s hooves clopped rhythmically on the blacktop, slowing as the animal approached.

The faintest apprehension brushed her nape, and she shook it away. She was surely far safer here than on some of the city’s streets, strange though the equipage looked to her.

The buggy came to a halt next to her. She had to open her window and crane her neck to look up at the person who leaned down toward her.

The young woman’s face was framed by a black bonnet, oddly anachronistic. Her long-sleeved, dark green dress had a matching apron. Jessica had to remind herself that she’d been driving through center city Philadelphia only a couple of hours ago. Beyond the woman, the man who held the buggy lines had the sort of haircut achieved by cutting around a bowl on the head, topped by a straw hat. Well, maybe their dress wasn’t that much stranger than that of the Goth couple she’d spotted yesterday, the woman wearing a studded leather dog collar around her neck.

“You are lost, ja?” The woman gave her a tentative smile. “Can we help?”

Her English was accented, almost sing-song in quality, but understandable enough.

“Yes, thank you.” Did she sound relieved or desperate? “I’m not sure where I am. I’m trying to find an address off Dale Road near Springville.”

“Ach, you are not so very far wrong at all.” Her face broke into a smile. “I am Anna Mast, and this is my brother, Aaron. We are chust coming home from delivering eggs in Springville.”

“It’s not far, then?” Surely it couldn’t be, if these two had come from there in a buggy. “Can you give me directions?”

The brother leaned over, squishing his sister against the side of the seat. “Directions depend on how far along the road you are going already. Who are you going to see?”

Her ear must be adjusting to the dialect, because she could understand him even though his English was more heavily accented than his sister’s. She hesitated. Normally she wouldn’t give out information like that to a stranger, but these were not normal circumstances. If she didn’t want to spend what was left of the afternoon wandering these lanes, she’d better not alienate the only help that was offered.

“I have an appointment with Mrs. Geneva Morgan. Her address—“

“Ach, everyone knows the Morgans.” His face split in a grin, blue eyes crinkling. “Anyone would help a friend of Mrs. Morgan.”

His sister was nodding agreement. Evidently Mrs. Morgan was well-known in the area.

“You chust go down the road past the Stoltzfus farm—“

“She won’t know which is the Stolzfus farm,” his sister said, elbowing him. “Go about a mile and you’ll see a big red barn on the left-hand side of the road. Turn right there—it’s the first paved road you come to. Follow that for about five miles, and it will take you to Dale Road. Then go left, and you’ll see the Morgan’s mailbox only a little piece down the road.”

“Thank you so much. I really appreciate your help.”

“It makes no trouble.” Aaron gestured her to go ahead of them, sitting back on the seat again.

“Well...goodbye.” It seemed an oddly abrupt way of ending a conversation, but what did she know about Amish ways?

She pulled back onto the road, lifting her hand in a wave, and watched the buggy recede in her rearview mirror. She’d just met her first Amish people. She could only hope that the boy she was supposed to defend was as cooperative as that pair.