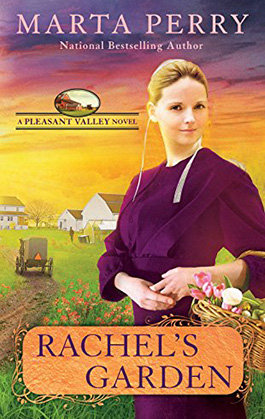 An Amish widow must rely on her faith and the kindness of her close-knit community as she mends her broken heart in this compelling novel in the Pleasant Valley series.

It has been almost a year since the Amish community of Pleasant Valley lost Ezra Brand to a tragic accident. Since then, his wife Rachel has struggled to raise their three children and run their dairy farm...

Rachel’s friends and family have come forward to help. But all of their constant advice, however well intentioned, puts undue pressure on Rachel. And when Ezra’s best friend, Gideon Zook, asks her permission to build the greenhouse that Ezra had always promised her, she finds his presence too painful a reminder of the past.

As spring turns to summer, and Rachel puts her heart into growing the plants that have always brought her joy, can she discover the courage to embrace new beginnings?

A flicker of movement from the lane beyond the kitchen window of the old farmhouse caught Rachel Brand’s eye as she leaned against the sink, washing up the bowl she’d used to make a batch of snickerdoodles. A buggy—ja, it must be Leah Glick, bringing Rachel’s two older kinder home from the birthday party for their teacher already.

Quickly she set the bowl down and splashed cold water on her eyes. It wouldn’t do to let her young ones suspect that their mamm had been crying while she baked. Smoothing her hair back under her kapp and arranging a smile on her lips, she went to the back door.

But the visitor was not Leah. It was a man, alone,

Shock shattered her curiosity when she recognized the strong face under the brim of the black Amish hat. Gideon Zook. Her fingers clenched, wrinkling the fabric of her dark apron. What did he want from her?

She stood motionless for a moment, her left hand tight on the door frame. Then she grabbed the black wool shawl that hung by the door, threw it around her shoulders, and stepped outside.

The cold air sent a shiver through her. It was mid-March already, but winter had not released its grip on Pleasant Valley, Pennsylvania. The snowdrops she had planted last fall quivered against the back step, their white cups a mute testimony that spring would come eventually. Everything else was as brown and barren as her heart felt these days.

A fierce longing for spring swept through her as she crossed the still-hard ground. If she could be in the midst of growing things, planting and nurturing her beloved garden—ach, there she might find the peace she longed for.

Everything was too quiet on the farm now. Even the barn was empty, the dairy cows moved to the far field already, taken care of by her young brother-in-law William in the early morning hours.

The Belgian draft horses Ezra had been so pleased to be able to buy were spending the winter at the farm of his oldest brother, Isaac. Only Dolly, six-year-old Joseph’s pet goat, bleated forlornly from her pen, protesting his absence.

Gideon had tethered his horse to the hitching post. Removing something from his buggy, he began pacing across the lawn, as if he measured something.

Then he saw her. He stopped, waiting. His hat was pushed back, and he lifted his face slightly, as if in appreciation of the watery sunshine. But Gideon’s broad shoulders were stiff under his black jacket, his eyes wary and his mouth set above his beard.

Reluctance slowed her steps. Perhaps Gideon felt that same reluctance. Aside from the formal words of condolence he’d spoken to her once he was well enough to be out again after the accident, she and Gideon had managed to avoid talking to each other for months. That was no easy thing in a tight-knit Amish community.

She forced a smile. “Gideon, wilkom. I didn’t expect to be seeing you today.”

What are you doing here? That was what she really wanted to say.

“Rachel.” He inclined his head slightly, studying her as if trying to read her feelings in her face.

His own face gave little away—all strong planes and straight lines, like the wood he worked with in his carpentry business. Lines of tension radiated from his brown eyes, making him look older than the thirty-two she knew him to be. His work-hardened hands tightened on the objects he grasped—small wooden stakes, sharpened to points.

He cleared his throat, as if not sure what to say to her now that they were face to face. “How are you? And the young ones?”

“I’m well.” Except that her heart twisted with pain at the sight of him, at the reminder he brought of all she had lost. “The kinder also. Mary is napping, and Leah Glick took Joseph and Becky to a birthday luncheon the scholars are having for Mary Yoder.”

He moved a step closer to her, and she realized that his left leg was still stiff—a daily reminder for him, probably, of the accident.

For an instant the scene she’d imagined so many times flashed yet again through her mind, stealing her breath away. She seemed to see Ezra, high in the rafters of a barn; Gideon below him; the old timbers creaking, then breaking, Ezra falling as the barn collapsed like a house of cards...

She gasped a strangled breath, like a fish struggling on the bank of the pond. Revulsion wrung her stomach, and she slammed the door shut on her imagination.

She could not let herself think about that, not now. It was not Gideon’s fault that she couldn’t see him without imagining the accident that had taken Ezra away from them. She had to talk to him sensibly, had to find out what had brought him here. And how she could get him to go away again.

She clutched the shawl tighter around her. “Is there something I can do for you, Gideon?”

“I am here to measure for the greenhouse.”

She could only stare at him, her mind fumbling to process his words. The greenhouse—the greenhouse Ezra had promised her as a birthday present. That had to be what Gideon meant.

“How do you know about the greenhouse?”

The words came out unexpectedly harsh. Ezra was gone, and plans for the greenhouse had slipped away, too, swamped in the struggle just to get through the days.

He blinked, apparently surprised. “You didn’t know? Ezra and I went together to buy the materials for your greenhouse. He asked me to build it for you. Now I’m here to start on the work.”

The revulsion that swept through her was so strong she could barely prevent it from showing on her face.

Perhaps he knew anyway. The fine lines around his eyes deepened. “Is there a problem with that?”

“No—I mean, I didn’t realize that he had asked you. Ezra never said so.”

“Perhaps he thought there was no need. I always helped him with carpentry projects.”

True enough. It wasn’t that Ezra couldn’t build things with his own hands, but he was far more interested in the crops and the animals. Since his childhood friend Gideon was a carpenter, specializing in building the windmills that had begun to dot the valley, Ezra had depended on him.

But that was before. Now—

No, she couldn’t handle that. She couldn’t. It was, no doubt about it, a failure on her part, one that she should be taking to the Lord in prayer.

“Rachel?” She had been silent too long, and Gideon studied her face with concern. “Was ist letz? What’s the matter?”

“Nothing,” she said quickly. “Nothing at all. It’s just that I hadn’t thought about the greenhouse in months.” Her voice thickened—she couldn’t help that.

Gideon heard it, of course. A spasm of something that might have been pain crossed his face.

“It gave Ezra great pleasure to think about giving it to you.” His deep voice seemed choked.

She blinked, focusing her gaze on the barn beyond him, willing herself to be calm. Think. What could she say that would not hurt Gideon, but would get him to go away?

“I haven’t—I haven’t decided what to do about the greenhouse.” As she hadn’t decided so many things in the past few months, lost as she’d been in grief. “Will you give me a little time to think?”

But his voice had cooled, as if he knew something of what she was feeling. His gaze was intent on her face, probing for the truth, and all she could think was that she wanted him to leave so that she didn’t have to talk about the bittersweet nature of Ezra’s last gift to her.

The creak of an approaching buggy broke the awkward silence between them. She glanced toward the lane.

“Here is Leah, back with the children.” She probably sounded too relieved as she turned back to him. “Perhaps we could talk about this some other day.”

His expression still grave, Gideon nodded. “Ja, another time, then.” He turned away, but then glanced back over his shoulder. “I promised Ezra, ain’t so? I have to keep that promise.”

He walked toward his waiting buggy, back stiff.