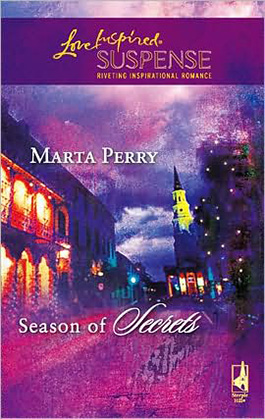 As a teenager, Dinah Westlake had witnessed the murder of her pregnant cousin, but a concussion blocked her memories of that night. Now, ten years later, her cousin's widower, Marc Devlin, had returned to Charleston to give his young son a true Southern Christmas. It was a chance to make amends in a family torn apart by the tragedy-and the suspicion that Marc was responsible for his wife's demise. But when several dangerous "accidents" occurred amid the colorful holiday celebrations, Dinah's recollections of that past dark night began to resurface.

Would she discover a killer inside the man she'd grown to love?

"SEASON OF SECRETS is a suspense set during the colorful holiday season, but it isn't any less suspenseful. The characters are real, immersed in true southern charm, and the story is as colorful as the season. I enjoyed reading SEASON OF SECRETS and look forward to more from this talented author."
— Laura Hilton

"Marta Perry delivers a strong story of tension, fear and trepidation in SEASON OF SECRETS.It's an excellent mystery that's certain to keep you in constant suspense. While love is a powerful entity in this story, danger is never too far behind. Four and a half Stars, Top Pick!"
— Robin Taylor, Romantic Times Book Reviews

"Why is he coming back now?"

Aunt Kate put her morning cup of Earl Grey back in the saucer as she asked the question for what had to be the twentieth time since they'd heard the news, her faded blue eyes puckered with distress. December sunlight streamed through the lace curtains on the bay window in the breakfast room, casting into sharp relief the veins that stood out on her hand, pressed to the polished tabletop.

Love swept through Dinah Westlake, obliterating her own fears about Marc Devlin's return to Charleston. She covered the trembling hand with her own, trying to infuse her great-aunt with her own warmth. Anger sparked. Marc shouldn't come back, upsetting their lives once again.

"Maybe he just wants to sell the house since the Farriers moved out." Aunt Kate sounded hopeful, and she glanced toward the front window and the house that stood across the street in the quiet Charleston historic block.

Dinah forced herself to focus on the question. "I suppose so. Do you know if he's bringing Court?"

Her cousin Annabel's son had been three when she'd seen him last, and now he was thirteen. She remembered a soft, cuddly child who'd snuggled up next to her, begging for just one more bedtime story. It was unlikely that Courtney would want or need anything from her now.

Dinah blinked. "Don't you want to see Courtney?" This visit was the first indication that Marc would let his son have a relationship with his mother's kin that consisted of more than letters, gifts, and brief thank you notes.

Tears threatened to spill over onto her great-aunt's soft cheeks. "Of course I do. But that poor child shouldn't be exposed to the house where his mother died, even if it means I never see him again."

"Aunt Kate-" Dinah's words died. She couldn't say anything that would make a difference, because she understood only too well what her aunt felt. She, too, had not been back in that house since Annabel's funeral.

Except in the occasional nightmare. Then, she stood again on the graceful curving staircase of Annabel and Marc's house, looking down toward the dim hallway, hearing angry voices from the front parlor. Knowing something terrible was about to happen. Unable to prevent it.

"Everyone will start talking about Annabel's death again." Aunt Kate touched a lacy handkerchief to her eyes, unable as always to say the uglier word. Murder. "Just when it's forgotten, people will start to talk again."

Something recoiled in Dinah. It seemed so disloyal never to talk about Annabel. Still, if that was how Aunt Kate dealt with the pain, maybe it was better than having nightmares.

She slid her chair back, patting her aunt's hand. "Don't worry about it too much, dear. I'm sure people are so busy getting ready for the Christmas holidays that Marc will have been and gone before anyone takes notice."

Her aunt clasped her hand firmly. "You're not going to the office today, are you? Dinah, you have to stay home. What if he comes?"

It was no use pointing out to her that Dinah was going to police headquarters, not an office. Aunt Kate couldn't possibly refer to her as a forensic artist. In Aunt Kate's mind, a Charleston lady devoted herself to the church, charity, and society, not necessarily in that order.

"I thought I'd check in this morning." As a freelance police artist she only worked when called on, but she'd found it helped her acceptance with the detectives to remind them of her presence now and then.

Her hesitation lasted only an instant. Aunt Kate had taken care of her. Now it was her turn. She bent to press her cheek against Aunt Kate's.

"Of course I will, if that's what you want. But given the way he's cut ties with us, I don't expect Marcus Devlin to show up on our doorstep any time soon."

Was she being a complete coward? Maybe so. But she'd fought her way back from the terror of the night Annabel died, and she had no desire to revisit that dreadful time.

That was a petition that was hardly likely to be granted, now that Marc Devlin was coming home.

After helping her aunt to the sunroom that looked over her garden, where she would doze in the winter sunshine, Dinah cleared the breakfast dishes. It was one of the few things Alice Jones, her aunt's devoted housekeeper, allowed her to do to help.

Alice was nearly as old as her great-aunt, and the two of them couldn't hope to stay on in the elegant, inconvenient ante-bellum house on Tradd Street if she weren't here. She wasn't even sure when she'd gone from being the cosseted little girl of the house to being the caretaker, but she didn't see the situation changing any time soon, and she wouldn't want it to.

A sound disturbed the morning quiet. Someone wielded the brass dolphin knocker on the front door with brisk energy. It could be anyone. Her stomach tightened; the back of her neck prickling. Instinct said it was Marc.

Heart thudding, she crossed the Oriental carpet that had covered the hall floor for a hundred years or so. She turned the brass knock and opened the door.

Instinct was right. Her cousin's husband stood on the covered verandah, hand arrested as he raised it to attack the knocker again. A shaft of winter sunlight, filtered through the branches of the magnolia tree, struck hair that was still glossy black.

For a moment, Dinah could only stare. It was Marc, of course, but in another sense it wasn't. This wasn't the intent, idealistic young prosecutor her teenage dreams had idolized.

"Dinah." He spoke first, his deep voice breaking the spell that held her silent. "It's been a long time."

"Not by our choice," she said, before thinking about the implication.