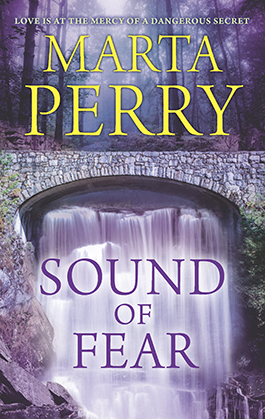 In the sweet subtle wind of a Pennsylvania Dutch town, a lost woman and a man of duty will risk their lives to uncover her true identity

The foundation of Amanda Curtis's very existence cracks the moment she discovers the woman she thought was her mother has never given birth. Where she belongs is a question she can't put to rest. But when the clues lead her to a charming yet chilling small town, the threat against her begins to unfold.

Trey Addison is a fixture in Echo Falls. The town and the people are his to protect. He was born to take his place in the family legal firm, but now that a stranger desperate to unlock her past is depending on him, he's forced to make an impossible choice. If Trey doesn't protect Amanda, she'll walk straight into a deadly trap. If he helps her expose the secrets that haunt her, the truth could shatter them both.

Amanda Curtiss had hoped that going back to work would distract her from the grief that threatened to drown her. It didn’t work. Every person at the veterinary practice felt they had to commiserate on her loss.

“So very, very sorry about your mother’s death. So shocking, to have one of Boston’s most noted artists taken away by a random street crime.” Alicia Farber’s prominent blue eyes, so like those of her pampered Pekinese, welled with tears. “Pookie is sorry, too. Aren’t you, Pookie?”

Pookie’s expression exhibited its usual distain for lesser beings. The sight of Amanda’s white lab coat always brought out the worst in him, and he bared his teeth.

“Let’s just see what’s going on with Pookie, shall we?” Amanda lifted the small dog to the exam table with gentle hands, careful to stay out of the way of his needle-sharp teeth.

“He’s been barely eating a bite of his food.” Alicia hovered anxiously. “I just knew you’d want to see him. Tell me the worst. I can take it.”

To do her justice, Alicia was genuinely apprehensive. They all were—all the owners of pampered pets who came through the doors of one of Boston’s most successful veterinary services. Amanda’s job, as one of those at the lowest rung of the ladder, was to reassure the owners while treating their pets. And to refrain from pointing out that both pets and owners would benefit from more exercise and less rich food. No one took that kind of advice well.

By the time Amanda was ushering Alicia and her pet out of the exam room her head was throbbing and her throat was tight, as it had been since the police officers had come to the door with their grim news.

Gracie, the receptionist, caught her as she passed. “Dr. Curtiss, there’s someone here to see you.” Lowering her voice, she added, “He said it was personal business, so I put him in an empty exam room. Number Four.”

“Thanks, Gracie.” Brushing any stray Peke hairs from her lab coat, Amanda headed for the exam room, her stomach clenching. Personal business had taken on an ominous sound lately, since it invariably had to do with her mother’s death.

But when she opened the door, her face relaxed into a smile. Robert McKinley was not only her mother’s attorney but a long-time family friend as well…Uncle Robert until she’d felt she was too old for the term.

“Robert. I didn’t expect you…” She stopped, her brain catching up with her tongue. Robert wouldn’t come to her workplace on anything routine. “What’s wrong?”

“Why should anything be wrong?” He kissed her cheek, and she smelled the faint aroma of musk that always advertised his presence. “Are you sure you should have come back to work so soon? It wasn’t necessary.”

Maybe not financially, but it was for her mental health. “I’d rather be busy. I need something to occupy my mind.”

“If you’re sure.” He didn’t sound convinced, and Amanda read the uneasiness behind his warmth.

“You wouldn’t come here unless something had happened. Out with it.” Amanda fought to keep her voice steady. “Whatever it is, it can’t be worse than what’s already happened.”

Nothing could be worse than losing her mother is such a brutal way…never again to see her forehead wrinkle in absorption over a new painting, never to feel the warm of her hug, never to hear the laughter in her voice…

Robert frowned, taking a step away. “I know.” His voice wasn’t entirely steady either. He’d adored Juliet in his own staid way. “It may be nothing, but one of the detectives dropped by with the coroner’s report. It had raised some questions in his mind.”

“Questions?” Her mind shied away from imagining a coroner’s report.

“Perhaps I’m making too much of this. You might already know.” He shook his head slightly, as if to clear it. “The autopsy confirmed something that seemed…odd.” He held up a hand to silence her when she would have burst out with a demand to hear it, whatever it was. “It seems that Juliet Curtiss, your mother, never had a child.”

Amanda froze, staring at him. The words were in English, all right, but they didn’t make any sense. “What do you mean? Of course she had a child. I’m standing right here.”

“Juliet never bore a child,” he repeated. “There isn’t any doubt, Amanda. I read the report for myself, and then I called the coroner for confirmation. Juliet had never had a child.”

Her sluggish wits started to work. “You mean I’m adopted? But why on earth wouldn’t she have told me?”

Robert shrugged, seeming relieved that the worst of his news-breaking was over. “I believe specialists do recommend that the child be told, but it could be that Juliet couldn’t bear the idea that your feelings about her would change if you knew she wasn’t your biological mother.”

At some level she wanted to laugh at that, because it was so ridiculous to think of Juliet in those terms. But if she started to laugh, she wasn’t sure she’d be able to control her emotions.

"Be serious, Robert. Juliet wasn’t a clinging mama. That wasn’t the sort of relationship we had.”

Amanda paused to consider what she’d just said. She and her mother had certainly been close, but Juliet didn’t dote. It hadn’t been in her nature. True, Amanda had lived at home since her practice and her life had fallen apart in Pennnsylvania, but they’d lived very independent lives. Juliet had her work, and Amanda had hers.

“You never thought…” Robert began, stepping delicately in what no doubt seemed like a minefield to him.

“You see the problem,” he said, frowning again. She thought he held back impatience when she looked at him blankly. “Legally,” he amplified. “Your mother…Juliet…must have adopted you prior to the time I met her. You’d have been about eight, I think, when she bought the brownstone. That was the first bit of business I did for her.”

Obviously Robert expected her to concentrate on the problem. She tried to rein in her wandering thoughts. Focus, she ordered herself. “Yes, I’d have been eight when we moved uptown. She’d had her first really successful show, and our lives changed.”

Not that she’d minded the life they’d had before that. The tiny apartment in one of Boston’s many ethnic neighborhoods had been home. But Juliet had wanted more…for herself, but certainly for her daughter.

“If you don’t remember any other life, Juliet must have adopted you when you were quite small.” Robert wore his worried look. “There surely are papers to that effect somewhere.”

“Aren’t all her legal documents at your office? She always said she didn’t have the talent or the energy to deal with things like that. Her work…”

“She was an artist, of course. But that’s no excuse for not having your affairs in order.” That was as close as Amanda had ever heard him come to sounding critical of Juliet. “You can see the quandary that leaves us in now. We must establish your legal position in regard to your mother’s estate.”

“But she had a will. You showed it to me, remember?”

“At my insistence, she did.” He sounded grim. “It leaves everything of which she died possessed to her daughter, Amanda Elizabeth Curtiss.”

“Come, Amanda. Concentrate. You’ve always been the practical one. If you’re not her biological daughter, the language becomes ambiguous.”

“You mean our home might not be mine?” That possibility did penetrate the fog in which she groped. The brownstone was home. It might be lonely without Juliet, but every inch of it was filled with memories.

“If someone contested the will on the grounds that you are not Juliet’s daughter, that might well happen.” Robert clasped her hands in a firm grip. “There must be someone who knew Juliet longer than I did. They might know the circumstances of your…your adoption. Who were her oldest friends?”

Amanda released her hands to rub her temples. “But I don’t know of anyone. All of the people in our lives dated from the time we moved uptown.” Then it struck her. “But what about her brother, George? They’d been estranged for a long time, but he did come to the funeral. Surely he’d know…” Know where I came from. She finished the sentence in her mind.

This was crazy. It was like spinning around on the ice in an out-of-control car. Every anchor she reached for slid from her grasp.

“George Curtiss is the last person I’d confide in at this point. Don’t you see, Amanda? He can’t know there’s any question, or you can be sure he’d have brought it up.” Robert’s frown deepened. “There were good reasons for the breach between him and your mother. If half what she said about him is true, he’d be contesting the will in an instant if he even suspected.”

“Then what should I do? How can we find out?” If her uncle didn’t know…but he wasn’t her uncle, it seemed, any more than Juliet had been her mother.

“First of all, it’s essential that we find any documents relating to you. You’d better have a good search throughout the house for papers. You must have a birth certificate, at least. We may want to hire a firm of private investigators to look into it. And whatever you do, don’t talk about this to anyone but me.”

She blinked at that. “But my closest friends…”

“Not your friends, not anyone. Not until we have a better handle on your identity than we do now.”

Her identity. Amanda had always known who she was and where she belonged. Now it seemed she didn’t know at all. Who was she?