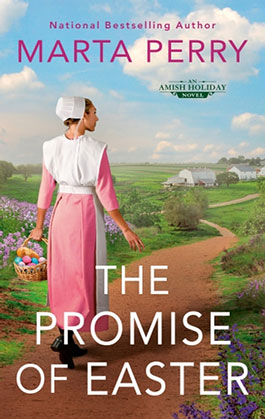 As Promise Glen prepares for the Easter season, one woman discovers that forgiveness is freedom—and maybe forever after.

Anna Stoltzfus lives a quiet but fulfilling life in Promise Glen. Though she lost her beloved brother in a tragic accident, her family is supportive and close-knit, and her job as a cherished teacher at the Orchard Hill Amish School fills her heart with joy each day. Anna knows one day she’ll find someone she can love and marry, but she’s perfectly happy with the life she created. Anna’s comfort is quickly dashed, however, when the man Anna deemed responsible for James’s death returns to the Amish community—Matthew King.

Forgiveness is at the heart of being Amish, and no one else blames Matthew; his grief and pain over losing his dear friend are obvious. Still, no matter how she tries, Anna can’t let go of the reckless night that ended her brother’s life so soon. The ache had been more tolerable after Matthew left Promise Glen, but now, not only has he returned, Anna’s father accepts his offer to work on their farm.

As the preparation for Easter begins, Anna’s regular contact with Matthew introduces her to a man far different than the boy she knew before. Perhaps the season of solemn reflection and joyous remembrance might be exactly what they both need to find forgiveness for the past for a hopeful future…

Matthew King took the first step on his long journey home and suddenly felt as if he’d walked into a wall of ice. The April day was sunny and warm, but Promise Glen itself was rejecting him. Even after nearly two years away, he still wasn’t welcome.

“You sure about doing this?” The tart voice of his great-aunt echoed his thoughts. Aunt Ella stood in the doorway of her house, scanty white hair screwed back under a snowy kapp, her faded blue eyes as sharp as her voice.

“I have to.” Matt didn’t expect her to understand, but he knew he couldn’t go on carrying his load of guilt. The need for relief pushed him into movement.

She sniffed. “No point in stirring up things in my mind, but you’ll do what you want. You always did.” The door closed with a snap, punctuating her words.

Aunt Ella’s advice was typical of her. She had a sharp tongue, and she seemed to know everything that went on. No wonder most folks treated her with caution. Still, she was always fair. Whether she liked you or not, a person could count on her to be fair. Besides, she’d taken him in without question, and he owed her for that.

Once started, Matt kept on moving. It was less than two miles to the Stoltzfus farm—not much of a walk in Amish terms, but his years of living out in the Englisch world had changed a lot of things about him, including the fact that he drove a car, not a buggy.

He’d guess that nothing had changed here for his great-aunt or the rest of the Amish community. Mindful of Aunt Ella’s feelings, he’d pulled his car into a an unused corner of the barn and shoved bales of straw in front of it. He wouldn’t care to offend the only person who’d shown any signs of welcoming his return.

The Amish clothes he’d once worn had been waiting for him, stored in a trunk in the attic, left here by his parents when they’d moved to upper New York state. Their rigid interpretation of Amish beliefs wouldn’t allow them to destroy his clothes, but they didn’t have any trouble cutting him off.

The clothes weren’t a great fit. Two years of construction work had added both to his height and breadth. Still, he’d look Amish to strangers, even though he’d still be recognized by the Amish community. They’d know him only too well. He was the man who’d let his best friend fall from Hawk Cliff to his death.

The war raged in his mind as he strode along the lane bordered by the pale green growth of early spring. Given a few more days like this, the forsythia bushes would be covered with yellow blossoms. Too bad that the touch of spring didn’t seem to bring any rebirth to him.

He hadn’t come for that anyway. He’d come to confess his guilt to those he’d hurt. He’d come to make whatever atonement he could. Then he’d leave again.

The lane into the Stoltzfus farm appeared on his left, and soon Matt was approaching the farmhouse. He couldn’t help remembering how welcome he’d once been here. Filled with laughter, noise, warmth, and joy, it had been as different as could be from his own home.

Simon Stoltzfus had accepted his son’s friend as an extra member of his own large family, doling out chores and advice impartially. His wife, Miriam, had dispensed hugs and food in equal measures, her love overflowing to everyone who entered her door.

They’d given all that to him, and he’d brought them the worst grief any parent could bear.

The lane curved as it approached the back of the house, and Matt cut up through the windbreak of evergreens toward the barn. It was time for the afternoon milking, so he might catch Simon there alone.

As he neared the door he caught the sound of voices—Simon and his father, the man Matt had always called Grossdaadi, were doing the work together. Sucking in a deep breath, he stepped into the doorway.

The dimness inside contrasted with the bright afternoon sunshine, and he hesitated while his eyes adjusted.

“Who’s there?” It was Simon’s voice. To him, Matt would be a dark shadow against the sunlight.

“It’s me.” He stepped forward. “Matthew King.” He stopped, holding himself rigid, waiting for the response.

“Matthew.” Simon sounded choked. Then he stepped forward, his face working. “It is you. So you’ve come back.” His arm moved, but before Matt could duck, it was warm on around his shoulders. “Thank the gut Lord, you’re back where you belong.”

Unbelievably, Simon sounded glad to see him. Simon had never been demonstrative, not like Miriam, but here he was with his arm around Matt, holding him. “Look, Daad. Our Matthew has come home.”

Matt’s head was spinning. This wasn’t going at all the way he’d imagined it. He struggled for words.

“Not home…I mean, I just came back to…to tell you how sorry I am…I should have been able…” His own voice choked now, and he couldn’t get out the words he’d practiced.

“Ach, don’t be so foolish.” Simon grasped him more tightly. “The past is over. You’re here now, praise the gut Lord.”

Matt sucked in a breath. “I came to tell you how sorry I am. I hoped maybe I could do something to help you…to make up for what James would have done.”

Simon’s hand, hard with years of physical work, pressed against his cheek for a moment. He didn’t seem to know what to say.

“Help?” Grossdaadi’s voice creaked, and as Matt’s gaze focused on him, he saw the difference nearly two years of grief had made. The old man was as lean and weathered as his son, but his skin was crinkled as old leather, and he seemed in some way to have shrunk.

“You want to help, you can take over this milking stool for me, young Matt. My old bones don’t get down so well anymore.” He patted Matt’s shoulder as he stepped away from the stool. “You haven’t forgot how, have you?”

The familiar chuckle that seemed to underline everything the old man said warmed him. This was real. He’d come here to meet anger and blame and found only forgiveness. They had forgiven him, and all he could think was that he didn’t deserve it.

Simon was chuckling, too, shoving him gently toward the waiting cow. “Course he hasn’t forgotten. You taught him, remember? Show him you remember, Matthew.”

He didn’t seem to have a choice. He slid onto the stool, leaning against the cow’s warm, smooth side, and hoped he wasn’t going to make a fool of himself.

But apparently it would take more than two years to wipe away the familiar movements and the equally familiar gush of milk into the pail. The rhythm took over, and he began to relax for the first time since he’d left Aunt Ella’s.

“You’re staying over at Ella’s, ain’t so?” Grossdaadi’s rumble of laughter sounded again. “You won’t find her changed, that’s certain sure. Ella just gets sharper with age. That’s how it is. Us old folks get more of whatever we already are.”

“Better not let Mammi hear you saying that.” Simon winked at Matt. “She’s still trying to reform you, ain’t so?”

“That makes her happy, that’s her way. My old woman is the sweetest thing that ever came out of Promise Glen. Did you know that every boy for miles around was after her, and she picked me? Still can’t figure out why after all these years.”

“Why don’t you ask her?” Simon retorted.

Matt, listening to their familiar banter, found every muscle in his body had eased. He’d been geared up for a battle that hadn’t come. Simon and his father were the same as they’d always been, still teasing each other about the same things, still working together with the pleasure that had been so missing between Matt and his father. Amid everything that had changed in his life, Matt was glad to find something the same.

“Matt, you’ll stay for supper with us, yah?” Simon said. “Miriam and Grossmammi won’t forgive us if we let you get away without seeing them…and the young ones, too. Ella will understand.”

He opened his mouth to say he couldn’t, and found instead that he was agreeing. It was too tempting to stay in this warmth a little longer. Besides, he hadn’t really had a chance to say all he’d come to say.

The sound of a horse and buggy approaching the barn made Simon glance toward the door.

“That’ll be Anna, coming home from school. You know she’s the teacher at Orchard Hill now?”

“Yah, Aunt Ella told me.” He shook his head. “Seems like little Anna can’t be old enough to be the teacher.”

“Don’t let her hear you say that,” Simon retorted. “She’s a fine teacher, though I do say it myself, and she certain sure loves it.”

Grossdaadi nodded in agreement. “How could the scholars help but learn when she gives them that sweet smile of hers? Like her grossmammi, she is.”

The clink of harness told Matt that Anna was unharnessing her horse. He lifted the full bucket, and Simon grasped it. “I’ll do this. Go and greet Anna. It’s been a long time.”

Nodding, he stepped out of the barn and moved toward the buggy and the slim figure who was walking a bay mare from between the shafts.

He watched her stiffen, spin, and fix an incredulous gaze on his face. She clearly couldn’t believe what she was seeing.

And then she realized he was real, and he saw her heart-shaped face become rigid, as if carved out of ice. Only her deep green eyes were alive.

Alive? They were on fire with fury at the sight of him. Now he’d found the reaction he’d expected all along.