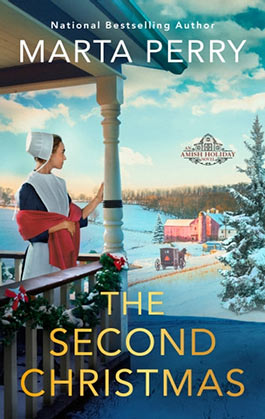 The warmth of the Christmas season and a woman’s return home to the charming Amish community of Promise Glen opens the door to a second chance at love.

When Leah Beiler pictured returning to Promise Glen, she imagined taking everything she learned from her aunt’s business in Upstate New York and starting up a quaint herbal tea shop of her own. What she didn’t expect was for Josiah Burkhalter to insist on helping her. Josiah might have been her childhood sweetheart but they’ve both changed a lot since then and Leah’s not sure she can trust the man who once broke her heart.

Josiah is determined to make the most of this unexpected second chance. When he hears of Leah’s plans to open her own shop, he resolves to help in any way he can—beginning his gentle campaign to win her back by renovating the small cottage on her family’s farm.

During her time away, Leah looked forward to once again spending the holiday season with her family, especially Second Christmas, December 26th, a time of celebrating with extended family and close neighbors like the Burkhalters. But as Christmas nears, her feelings for Josiah grow more confused, strengthened by their time of working together. Now it will take all the magic of the season for Leah to confront her fears and reach for the love she deserves.

“The cottage needs some work, but your Mamm and I think it will be perfect for you.”

Her father’s comment brought a rueful smile to Leah Stoltz’s face. Daad didn’t mean that she needed work, but that was true, too. At least she was home in Promise Glen, and she couldn’t think of a better place for getting herself back to normal again after the trials of the past year.

“I know it will take time and effort to turn it into the herbal business I want,” she said, trying to reassure him. “But I have all winter before the spring growing season.”

The small cottage sat on a wedge of land between Daad’s farm and the next one, and it had been a thorn in her father’s side for years. It had been owned by someone who lived halfway across the country and seemed happy to let it deteriorate, and the condition had upset Daad’s ideas of what an Amish-owned property should look like. Her mother said that for the past year, he’d go out of his way to avoid passing it.

Finally the owner consented to sell, and Daad had snapped it up. Then he’d turned around and given it to his eldest daughter, Leah. At least, he was trying to give it to her. They were still arguing about that point.

Leah wrapped her jacket more closely against the chill December breeze. “I still say you must let me buy the property from you. After all, I have money from my year of working with Aunt Miriam’s business.”

Leah forced herself to sound pleasant about that fact, but it still rankled. The truth was that her aunt had sold the business out from under her, and even the money Aunt Miriam had forced on her hadn’t eased her intense disappointment about losing the business she’d thought would be hers. Or her sorrow that a person who meant so much to her didn’t trust her any longer.

“Ach, don’t be ferhoodled.” Daad grasped her arm in his as they walked through the crisp, frosty grass toward the cottage door. “What else do your Mamm and I work for but to help our kinder? Your bruder Micah will want the farm, that’s certain sure. He’s a born farmer. As for James,” he shook his head, frowning a bit when he thought about her eighteen-year-old brother, who seemed in no hurry to finish his running around time and settle into having a real job and, of course, a wife.

“He’ll settle down when the time is right, Daad. You’ll see.”

James was just slow to accept the next step in growing up. He always had been…crawling long after he’d learned to toddle and letting Micah or Leah talk for him instead of trying it himself. According to Leah’s grandmother, that was just the way he was made.

Leah’s parents had always assumed that all six of their children would marry an Amish partner and have babies, the more the better as far as Mammi was concerned. Actually, they hadn’t started urging the three youngest girls yet, and as for Leah herself…well, her one serious relationship had come to nothing but disappointment. It might be best if they gave up on her.

Marriage wasn’t part of her plans, not after that unhappy romance. Her mind skittered briefly to Josiah Burkhalter, next door neighbor, childhood friend, rumspringa romance, and very nearly husband until someone else caught his wandering eye. The Burkhalters had been a part of their lives forever, and she felt sure everyone had been thrilled at the thought of their children marrying. Except, apparently, Josiah.

Daad had accepted her jaundiced view of marriage, she thought, and so he was determined to see her set up with the work she wanted, although he’d think a business a poor exchange for a husband and family.

They’d reached the front of the cottage, which had a small front porch that would be ideal for displays once she’d opened. The step creaked and wobbled under her foot, and she made a mental note of repair needed. And the front door didn’t respond to the key until Daad gave it a shove with his shoulder. Her list of repairs would grow quickly at this rate.

“The place is small, but it’s not as if you’ll be living here.”

Daad planted himself in the middle of the front room and looked around. Windows on the sides and in front gave plenty of light, and she knew there was a kitchen and another room in back, along with two small rooms upstairs.

Leaving aside the question of where she might be living, Leah looked around the large room, picturing it with shelves for herbal teas and mixtures, tables holding plants for sale, and small bins for dried herbs. With this amount of space, she could devote a corner to crafts like the scented herbal pillows she’d been making.

“I think it will be just right once it’s ready. Aunt Miriam gave me a lot of ideas for marketing, besides getting me started on herbs to begin with.” She tried not to let her feelings color her voice when she spoke of her aunt.

Aunt Miriam had interested her small niece in making an herb garden on a visit when Leah was ten. She’d continued to encourage her, talking about the day when they’d have a business together. And at a time when Leah’s romantic dreams had been shattered, she had invited Leah move across the state to live with her and learn the business.

Since she had no children of her own, she’d made it clear that she wanted Leah to take over eventually. That had made it all the harder when Aunt Miriam decided to sell out to a stranger. Leah had been ashamed…knowing she’d failed and struggling to find out why or how.

“Miriam certain sure knew her business.” Daad frowned a little, shaking his head slightly. “It’s a shame, her being so far from your mother. They were always close when they were young.”

Leah roused herself from unhappy thoughts to respond. “I remember hearing them sitting up late and giggling together like teenagers when she did come to visit, even if it wasn’t very often.”

Daad chuckled. “Yah, they did. But Miriam was caught up in her business, and your mother busy with you young ones. Maybe now that Miriam is retiring, we’ll see more of her.”

Their lives had gone in different directions, and Leah wondered if they had regretted that. Had they been happy with their choices? Had they sometimes thought yearningly of each other’s lives?

Decisions made early dictated the rest of a person’s life, it seemed, and some decisions were pushed on you. Like her decision to leave Promise Glen, and now the decision to come back.

She reminded herself there was use going over something that she couldn’t change. The past just had to be lived with, she guessed.

“About the carpentry work that’s needed…” Daad paused as if to be sure she was listening.

She looked at him. Was it her imagination, or did he seem ill at ease?

“Don’t worry,” she said quickly. “I know you and the boys don’t have time to do it all. I can afford to hire someone, and that’s what I plan to do.”

“We’ll want to help all we can,” Daad said quickly, “but we can’t do it all. Seems like you need a craftsman who knows cabinet-making for a lot of the work.”

“Yah, for sure. Who do you think would be best?” There were several possibilities within the church district. She didn’t doubt Daad would know.

“As a matter of fact, someone was just talking to me about it a few days ago.”

It wasn’t her imagination. Daad definitely looked uncomfortable, and she couldn’t imagine why.

He cleared his throat, glancing at the door as if considering an escape. “He’s interested in doing the work, and there’s no doubt in my mind he’d do it well.”

“Gut,” she said, trying to sound as brisk and confident as Aunt Miriam would. “Who is it?”

“I mentioned we’d probably be taking a look around this afternoon.” Now Daad was looking out the back window. “I thought he might stop by to talk about it. And there he is.”

Leah followed the direction of her father’s gaze, and her heart seemed to stop beating. The person approaching the door was hardly someone she’d consider reliable enough to do the job. Or to do anything else, for that matter. It was Josiah Burkhalter.