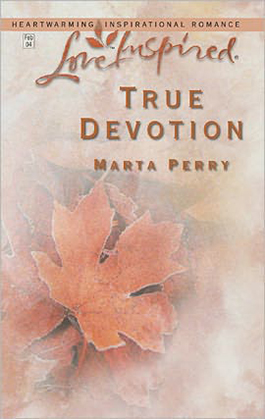 What kind of man turned away a pregnant woman? Susannah Laine could tell that Nathan Sloane had demons to wrestle with, but so did she. She'd come to Lakemont to find out what her late husband had been doing there before his sudden death. And she wasn't leaving without an answer.

Susannah's occupancy of the cottage where he and his wife lived before her death awakened painful memories for Nathan. Still, he couldn't deny his attraction to Susannah, and reluctantly agreed to help in her search. But the truth they uncovered threatened their burgeoning romance. Could God give Susannah the strenght to overcome her past and embrace this second chance at happiness?

Most people wouldn't throw a pregnant woman out into the cold. But the October sun was warm, and Nathan Sloane wasn't most people. The discovery that his unwanted renter was pregnant just made him more eager to be rid of her.

Nathan stood on the porch of the lakeside cottage, realizing he'd been staring for too long at the auburn-haired woman who'd opened the door to him. He glanced at the registration card in his hand.

He tried to smile, but the tension that rode him probably made it look more like a grimace. "I'm Nathan Sloane. My father, Daniel, owns Sloane Lodge."

She gave a brief nod, edging the door toward him slightly, as if ready to close it in his face. "Is something wrong, Mr. Sloane?"

"I'm afraid there is." Besides the fact that just being near the cottage rubbed his nerves raw. "My stepsister made an error when she rented the cottage to you."

The woman opened the door a bit wider, letting the autumn sunlight hit her face. It turned her hair to bronze and caught the gold flecks in eyes as deeply green as the hemlocks on the hillside across the lake.

It also showed the purple circles under those eyes, marring her fair skin. She looked like someone who'd been fighting a losing battle with insomnia.

"I don't understand," she said, frowning as if he'd just told her that her credit card had been rejected. "What sort of an error?"

Again he tried the smile. "We're getting ready to winterize the cottages. In fact, my father will be closing the lodge for the season before long." He hoped. "So you see, I'll have to ask you to make other arrangements."

"The person who checked me in didn't say anything about that." She didn't look particularly impressed by the explanation he'd rehearsed.

He spared an irritated thought for his stepsister. "Apparently Jennifer didn't understand. The cottage is not available to rent at all. And certainly not for an entire month at this time of the year."

He didn't seem to be getting very far. "Perhaps you'd like to move into the main lodge for a few days. Or we'd be glad to call around for alternative accommodations for you."

The woman's fingers were white where they clutched the edge of the door. She released it abruptly. "You'd better come inside."

She walked away from the door, giving him no choice but to follow her. If he clenched his jaw any tighter, it would shatter.

"I'm sorry for the inconvenience." he began.

"It's more than inconvenient."

The woman stood turned away from him, staring out the windows of the small living room that fronted on the lake. She was so slender that from this angle, she didn't even appear to be expecting. Irrationally, he found that made it easier to deal with her.

"I do apologize." He tried to express a warmth he didn't feel.

Get the woman out--that was what he had to do right now. Shut the cottages and persuade his father to close the lodge early for the winter. Maybe, by spring, he'd have been able to convince his stubborn father that a man who'd narrowly survived one heart attack shouldn't court another one by refusing to retire.

Ms. Morgan turned toward him, and for a moment her figure was silhouetted against the windows, her hands pressed against her stomach.

The image hit him like a blow. He saw Linda standing in front of those same windows, head thrown back in laughter as she pressed her hands to her swelling belly.

No. He fought the grief that threatened to overwhelm him. This woman was nothing like Linda. Linda had been gentleness and warmth. This woman was all chilly, sharp edges. He wouldn't let her remind him.

He forced himself to concentrate on her words, shutting out everything else.

"As I said, it's not a question of inconvenience. We have an agreement." Even her smile had an edge to it. "I don't intend to leave."

"An agreement?" He lifted his brows. "I don't recall signing a lease with you, Ms. Morgan."

"There's no need for a formal lease in this situation. The person who was operating as your agent checked me in and gave me the keys to this cottage. In my opinion, we have a legally binding agreement."

He suspected his eyebrows went even higher. "You're an attorney."

She wasn't just a nuisance. She was an intelligent nuisance who wouldn't let him gain the slightest advantage.

He glanced at the address on the registration card in his hand.

"What's a Philadelphia lawyer doing in a place like Lakemont in October?"

Pregnant. And alone, obviously, in spite of the gold band and large matching diamond on her left hand.

"I'm sure Sloane Lodge gets its share of tourists who come to admire the autumn leaves, doesn't it?" She put that hand up to push back a lock of auburn hair that had strayed onto her cheek.

"Leaf peepers generally come on the weekends. And if you'll forgive my saying so, you don't look the type."

She certainly didn't fit his idea of the kind of person who'd settle down in a rustic cottage on a smallish lake in the Pocono Mountains to watch the leaves change colors. Every inch of her, from the burnished auburn hair to the black outfit to the expensive and impractical shoes, shrieked urban professional.

She shrugged. "Let's say I'm looking for quiet and let it go at that."

Too bad he couldn't import a few bulldozers to increase the decibel level.

"Look, Ms. Morgan, surely we can resolve this in a way that suits both of us."

"As far as I'm concerned, this is resolved." He tried not to look around at the cottage that was only too familiar to him, living room and kitchen downstairs, with a deck over the lake. Two bedrooms and a bath up the narrow stairs, still decorated in the casual country charm Linda had insisted upon.

And he'd certainly better not think about the master bedroom, with its quilt-covered king bed situated to give a view out over the lake immediately on waking.

"This place is too isolated for a pregnant woman alone." The words were like poison on his tongue, and a fierce anger rose in him that she'd pushed him into saying them. "You ought to have someone around."

Her face tightened, the skin drawing bleakly against her high cheekbones. "Frankly, whether I'm alone or not is none of your business. And if you try to evict me because I'm pregnant, you'll be borrowing more trouble than you'll know what to do with."

He'd gone too far, obviously. He tried to tamp down his emotions. "I'm not saying anything of the kind. I'm just asking that you be reasonable."

"Reasonable?" Lightning seemed to spark from her eyes.

His choice of words had been a mistake. He raised his hands, palms outward. "Sorry. I shouldn't have said that. I'd just like to persuade you that you'd be more comfortable elsewhere."

"I'm perfectly comfortable." She rubbed her arms on the sleeves of the loose black sweater she wore, as if chilled, then nodded toward the still-open door. "I am, however, a little tired of this conversation. So if you don't mind."

Short of removing the woman bodily, he didn't have many options. It was clearly time to beat a strategic retreat. He nodded with as much grace as he could muster and went to the door.

He paused once he reached the porch. "We'll talk again later."

"I won't have changed my mind." The door snapped shut behind him.

He took the two steps off the porch and started down the lane toward the lodge. At least he could breathe again, once he was away from the cottage.

Ms. Susannah Morgan clearly thought she'd won that round. He grimaced. Well, maybe she had.

But that didn't mean he was giving up. For a lot of reasons, he wouldn't be satisfied until he'd convinced Susannah Morgan that she didn't belong here.

He spared a thought for the multi-million-dollar deal he'd been chasing for months. "I'll be a phone call or fax away. Henry will keep me posted on anything I need to know."

"Whatever you say." Henry's broad face was impassive as always. Henry was as unemotional as Tyler, which was probably why they worked so well together.

Tyler crossed the room quickly, pausing to pull his camel hair coat from the mahogany coat rack. It had been a raw, chilly March day in Baltimore, although Caldwell Cove would be something else.

Again the image shimmered in his mind like a mirage. Surf. Sand. A laughing, sun-kissed face. His wife.

They all want something. What did Miranda want?

He shoved the thought away and strode to the door. He'd deal with this, just as he dealt with any project that went wrong. Then he'd bury the memory of his first love so deeply that it would never intrude again.