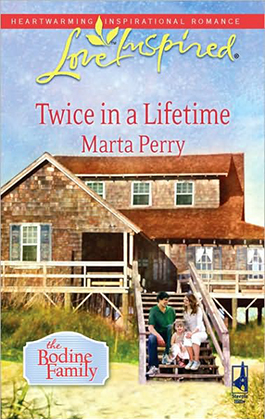 When her family calls broken-hearted Georgia Lee Bodine home to Charleston, she knows there's trouble. Her beloved grandmother hired some fancy lawyer to carry out eccentric requests--and unearth an old family secret. Georgia plans to send Matthew Harper packing until she discovers how much the widowed father cares about her grandmother. And that his heart is even more deeply guarded than her own. As they work together on the Bodine history, they uncover a surprise about themselves: that love can strike twice in a lifetime.

Georgia Bodine pulled into the crushed shell parking space of the elderly beach house and got out, the breeze off the ocean lifting her hair and filling her with a wave of courage that was as unexpected as it was welcome. She might be a total failure at standing up for herself, but to protect her beloved grandmother, she could battle anyone.

Refusing to let even the hint of a negative thought take hold, Georgia trotted up the worn wooden stairs. The beach house, like most on the Charleston barrier islands, had its first floor elevated to protect against the storms everyone hoped would never come.

The dolphin knocker smiled its usual welcome. The corners of her lips lifted in response, and she rushed through the door, calling for her grandmother as if she were eight, instead of twenty-eight.

Her impetuous run took her through the hall and into the large livingroom that ran the depth of the house. Sunlight pouring through the windows overlooking the Atlantic made her blink.

Someone sat in the shabby old rocker that was her grandmother’s favorite chair, but it wasn’t Miz Callie.

The man rose, looking as startled at her bursting into the house as she felt at finding him here. Aside from the stranger, the room, with its battered, eclectic collection of furniture collected over generations and its tall, jammed bookcases, was empty. Where was Miz Callie, and what was this stranger doing here?

The man recovered before she could ask the question. “If you’re looking for Mrs. Bodine, she went upstairs to get something. I’m sure she’ll be right back.”

A warning tingle ran along her skin. The interloper was in his thirties, probably, dressed in a button-down shirt and slacks that were more formal than folks generally wore on Sullivan’s Island. He stood as tall as the Bodine men, who tended to height, but tense, as if ready for a fight. Brown hair showed a trace of gold where the sunlight pouring through the window hit it, and his blue eyes were frosty. The few words he’d spoken had a distinctly northern tang.

This was the lawyer, then, the one causing all the trouble. The one who had Uncle Brett muttering about Yankee carpetbaggers and her daddy threatening to call everyone from Charleston’s mayor to the South Carolina governor, with a few council members thrown in for good measure. This was—had to be, Matthew Harper.

He took a step toward her, holding out his hand. “I’m Matt Harper. And you are—“

“Georgia Lee Bodine.” No matter how rude it was, she would not shake hands with the man. Her fists clenched. “Miz Callie’s granddaughter.”

Wariness registered in his eyes at the name, and he let his hand drop to his side, his mouth tightening. He knew who she was. Maybe he even knew why the family had called her home from Atlanta in such a rush.

Do something about your grandmother, Georgia Lee. You’ve always been close. She’ll listen to you. You have to talk some sense into her before it’s too late.

Who were they kidding? Nobody ever talked Miz Callie out of anything she’d set her mind on. Certainly not Georgia Lee, the least combative of the sprawling Bodine clan.

A flurry of footsteps sounded, and Miz Callie rushed into the room.

Georgia barely had time to register a quick impression of her grandmother—five foot nothing, slim and wiry as a girl, white hair that stood out from her head like a halo—before she was wrapped in a warm embrace.

She hugged in return, love rushing through her like a storm tide, and had to blink back tears. Unconditional love, that was what Miz Callie had always offered to the shy, uncertain child she’d been, and it was still there for the woman she’d become. Georgia had never been as aware of it as at that moment.

Help me, her heart murmured a fervent prayer. Help me keep her safe.

Over her grandmother’s shoulder she stared at Matthew Harper, her determination welling. She had come home because the family said Miz Callie was in trouble—that she was acting irrationally and that this man, this outsider, was trying to con her out of what was hers.

He wouldn’t succeed. Not without walking over the prone body of Georgia Lee Bodine, he wouldn’t.

Harper’s face tightened, as if he recognized what she felt.

Fine. They knew where they stood, it seemed, without another word being spoken. The battle lines were drawn.