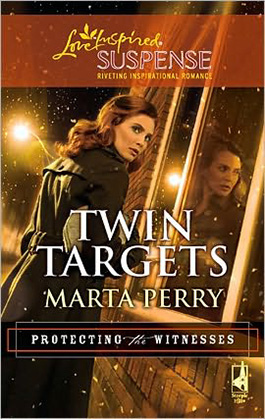 The Witness Protection Program was supposed to keep Jade Summers’s sister safe. So why is U.S. Marshal Micah McGraw saying her twin is dead? Jade doesn’t get the chance to ask because their meeting is interrupted by Ruby’s killers. The mob is after Jade...but neither Micah nor Jade knows why. Somehow, it’s connected to a decades-old crime. Finding the truth could be disastrous, but lives depend on it. Several women are in danger...and Jade is the first one in the killer’s sights. Book One in Protecting the Witnesses Continuity Series.

When the elevator doors opened, the secretary at the nearest desk nodded toward the door to the conference room. He was expected, apparently.

Those who were seated around the polished table looked up as he entered, wearing similar expressions of gravity...the chief, Jackson, Arthur Phillips, and two other criminal investigators who’d been working the Ruby Maxwell case.

He focused on Phillips, his boss. “You wanted to see me?”

“We’ve had another killing.” Phillips’s tone was harsh.

“Woman named Carlie Donald.” He shuffled through the files in front of him and pulled one out. “It went down last night. Harper took it.” He gave a crisp nod to one of the investigators.

Dave Harper probably hadn’t had any sleep, and his usually wry, amused face held a serious expression. “The locals didn’t call as quick as they should have. Apparently thought it was a domestic gone bad. She and the boyfriend had gone at it before. He’d been out drinking, came home to find her dead. Strangled.”

Micah slid into a chair, pushing thoughts of Jade to the back of his mind. “Carlie Donald.” He repeated the name. “I’m not familiar with her. Any Mafia connection?” Someone must think so, or else why was Jackson sitting in on this meeting?

“She testified against a small-time Mafia soldier,” Jackson said. “Went into Witness Protection, but didn’t change her lifestyle, apparently.”

“Liked to live on the edge,” Dave said. He handed a sheaf of photos to Micah. “Could be she picked up a guy and it turned violent. Or could be the boyfriend, if he got home earlier than they think.”

“A coincidence.” Jackson said the word as if it were a curse. “Hard to take.”

“Everything isn’t connected to the mob,” Phillips snapped. “If you think...”

Micah stopped flipping through the photos, staring at one. “That mark on her palm. What is it?” He was vaguely aware of having interrupted his boss.

“Graphite, according to the lab.” Dave consulted a report. “Lot of places she could pick up something like that. It doesn’t necessarily relate to the murderer.”

He flattened the photo on the table. “I’m afraid it does.” He looked, not at his boss, but at his brother. “Ruby had the same black mark on her palm.”

Phillips held out his hand for the photo, and Micah gave it to him. He studied it for a long moment. Then he looked at Jackson. “I owe you an apology, Agent McGraw.”

“So this is Mafia-related.” The chief marshal spoke for the first time. Former military, he didn’t get rattled easily, and he didn’t show it now. “This is your area, McGraw. What are they doing? Do these killings relate to the Bureau’s case against Vincent Martino?”

“Could be.” Jackson’s mouth clamped on the words. “More to the point right now, how did the mob find two unrelated female federal witnesses who have both been relocated to Montana?”

Silence, for a long moment. Micah’s gaze went from face to face as each person in the room assimilated the unpalatable truth.

“So.” Arthur Phillips’s face tightened to a rigid mask and said what they were all thinking. “There’s a leak. Here. In this office.”