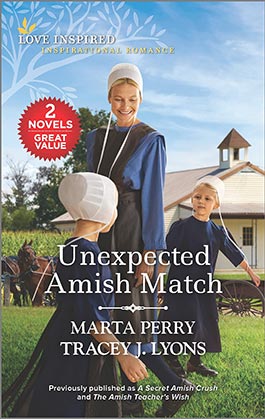 A surprising change of plans

Lydia Stoltzfus is content being a maidal, unwed but happily running an Amish coffee shop. Until her schoolgirl crush returns home and she falls in love…with his timid five-year-old daughter. Widower Simon Fisher has no plans to remarry, especially not to his lighthearted former neighbor. But will devotion to a child—and a matchmaking community—show them their future is together?

With the school damaged during a storm, teacher Sadie Fischer needs Levi Byler’s help repairing it. Levi has one condition—he won’t become a part of her search for a husband. He’s been hurt before, and love and marriage aren’t in his plans. But Sadie might just be the perfect woman to mend his heart…and convince him forever isn’t just for fairy tales.

Lydia Stoltzfus had gotten only a mile down the road toward town when the first huge wet flakes began to fall. Several spattered Dolly’s black coat, and the mare lifted her head, sniffed the air and gave a soft whicker.

“I know,” Lydia said, as much to herself as to the mare. “We weren’t supposed to get so much as a flake today. Maybe it will stop as soon as it started.”

Driving another few hundred feet along the road was enough to convince her that hope was futile. The flakes had begun by melting on the narrow country road, but now they were sticking, and the sound of Dolly’s hooves was muffled by their coating.

Should she keep going or turn back? Daad and Mammi would worry, that was certain sure, but how could she fail Elizabeth? Elizabeth Fisher, the elderly owner of the coffee shop where Lydia worked, had been sick off and on for most of the winter. She’d be relying on Lydia, and Lydia couldn’t let her down.

Keeping a firm grip on the reins, Lydia tried to discourage Dolly’s excited reaction to snow after what had been a fairly mild March. Those who had proclaimed an early spring in Lost Creek were going to be sadly disappointed, she feared.

“Komm, Dolly. Act your age.” The mare was nearly as old as she was, and at twenty-five, Lydia was seeing even her best friends begin to use the word maidal in connection with her. Old maid.

A car went past, moving slowly in response to the increasingly slick road, and a sliver of apprehension slid through her. Still, Dolly was sure-footed, and she certain sure didn’t get excited about traffic at her age. As long as they kept a steady pace, they should be fine.

Lydia had about three minutes to think that before she heard the sound of a car behind her—a car coming fast. She hugged the side of the road, hoping for the best. The driver was going much too fast for conditions, but there was plenty of room for the car to pass—

Without slowing, the vehicle rushed up on her. It was going to clear…but then, at the last possible moment, it clipped her wheel. She felt the buggy slide to the right and urged the mare back to the left, but it was too late. Lydia’s right rear wheel slid off the road, and she felt the jolt of dropping down to the berm. Dolly, with a sudden return to good sense, came to a halt and there they sat, half on and half off the road.

Breathing a silent prayer of thanks that they were both unhurt, Lydia assessed the situation. Would Dolly be able to get the buggy back onto the road or not? Shaking the lines, she tried to speak with more assurance than she felt. “Walk up, Dolly.” She clucked at her. “You can do it.”

Dolly made one half-hearted try and the buggy slid even farther. The mare halted, her ears back as if listening for a better idea.

“Stubborn creature.” Lydia anchored the lines with a quick turn and slid cautiously down onto the wet surface. Slippery, very slippery underfoot. She moved slowly around the mare, patting her, to the offside.

“Komm along, girl.” Grasping the headstall, she urged the mare to move forward. Dolly pawed with her forefeet, nervously testing the surface.

“Komm.” Lydia tugged, the mare danced, the buggy rocked. And then Lydia’s feet slid out from under her, she tried to right herself, and she landed flat on her face in the snow.

For an instant she lay there, stunned. Dolly reached down to nuzzle her, blowing warmly on her already wet face.

“Enough.” Lydia pushed the mare’s head out of the way and sat up. At least, she tried to sit up. It took two tries to make it happen, and then another three to get her up to standing.

Clinging to the harness, she caught her breath and tried to wipe the snow from her face. She hadn’t quite finished when her ears caught the sound of another buggy coming up behind her. Relief swept through her. Help had come. Anyone with a buggy would be someone she knew.

The driver pulled up and slid down from the seat. Enos Fisher, who had the farm next to Daad’s, came hurrying toward her, followed by another man.

“Ach, Lydia, what happened?” Enos reached her, slithering a little on the wet surface.

“She’s got herself into a pickle.”

The swirling snow hid the other man’s face, but she recognized the voice even though she hadn’t heard it in years, and something in her jolted to attention. It was Simon, Enos’s son. Several years her senior, he’d been the object of her schoolgirl crush back when she was a skinny kid and he was courting Rebecca Schultz. They’d married and disappeared out to an Ohio settlement, and she hadn’t seen him since.

And now he was back, and his first impression of her would be that of a sopping wet female who couldn’t even keep her buggy on the road.

Hoping her mortification didn’t show in her face, Lydia glanced up, snow whirling between them. “We heard you were coming back, Simon. Wilkom.” She hesitated, unsure of whether to mention the death of his wife or not.

Enos broke in before either of them could say another word. “Komm, Simon. We’ll push, and Lydia, you get in and take the lines. We’ll soon have you on the road again. You want to go home?”

She shook her head as she swung up to the seat. “I’m on my way to work. Elizabeth will be needing me.”

“Gut. We’re going there ourselves, so you can follow us. We’ll see you there safe, won’t we, Simon?”

Simon, looking to Lydia’s eyes as if he’d rather do anything else, nodded and put his shoulder against the rear of the buggy. With both of them pushing and her urging Dolly on, she was back on the road in moments. Before she could even express her thanks, they’d gone back to their own buggy. Trying to ignore her wet clothes and the hair that was straggling from under her kapp, Lydia fell in behind them, and they were off.

The snow kept on coming down, but with another buggy to follow, she realized that both she and Dolly felt more comfortable. In another ten minutes they’d reached the coffee shop, driving down the alley alongside to the shed where the horses could be safe and comfortable.

Lydia had Dolly taken care of quickly, and as she moved past Enos’s buggy, she spotted something she hadn’t before. Or rather, someone. A little girl, bundled up in a winter jacket and mittens, snuggled under a carriage robe in the back seat. Simon’s little girl, she’d guess.

She stopped next to the buggy, smiling. “Hello. I’m Lydia. What’s your name?”

Wide blue eyes stared at her from a small, pale face. Then the child turned and buried her face in the seat.

Before Lydia could come up with a word, Simon appeared next to her. “Her name is Becky. She doesn’t like to talk to strangers.”

The words could have been said in a variety of ways—excusing the child or expressing encouragement to her and thanks for Lydia’s interest. Instead Simon made it sound as if she were at fault for intruding, and his disapproving expression forbade her from trying again.

The imp of mischief that never failed to lead her into something she shouldn’t do suddenly came to life, and she responded with a cheerful smile.

“I just thought Becky might like to have a mug of hot chocolate to warm her up. I’m going to have one. What do you think, Becky?”

Simon’s displeasure loomed over her, but she focused on the child, holding her hand out and smiling. For an instant she thought it was no good. But then a small hand found its way to hers, and she lifted the little girl to the ground. Hand in hand they headed for the door, and Lydia knew without looking that Simon was still frowning.