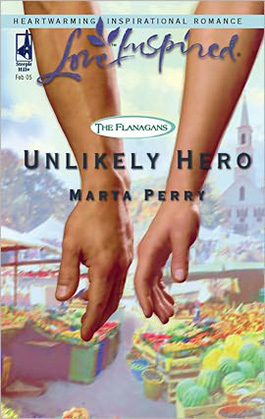 Executive assistant Claire Delany's experience with teens? Only when she'd been one. Yet somehow she was teaching a rowdy group of them how to apply for jobs. It wasn't her idea of a good time, but in exchange Pastor Brendan Flanagan would help her plan the wedding of her best friend and Brendan's cousin.

Claire had confused feelings about the handsome, opinionated Pastor Flanagan. She didn't want a family, or even religion. so why was she pouring out long-held-in feelings to Brendan? And why was he gaining a stronghold on her heart?

"You're wrong, that's all." Claire Delany had the fleeting thought that maybe she shouldn't speak that way to a minister. She dismissed it. No clerical collar would deter her from saying what she thought.

Not that Brendan Flanagan was wearing a clerical collar. She glanced at him as he held the door and then followed her from the church gym into a hallway that had classrooms on either side. Gray sweatpants and a navy sweatshirt, battered sneakers, disheveled chestnut brown hair tumbling onto his forehead. Only some hint of gravity in his lean face and hazel eyes suggested that he had anything more serious than a game of basketball on his mind.

"Maybe I am wrong." Brendan's voice, a baritone rumble, was mild. "But when Gabe asked me to officiate, I understood him to say they wanted a small, quiet wedding with no fuss."

"Gabe may have said that." She tried the no-nonsense voice that would warn anyone who worked for her that it was time to shape up. "But I know what kind of wedding Nolie has dreamed of all her life. I don't want her to give up her dream wedding just because they're so busy right now with the new project."

The grant her best friend had recently received would let Nolie and Gabe expand their service animal project to a lot more disabled people. She understood how important that was, but Nolie shouldn't have to sacrifice having a memorable wedding because of it.

Brendan came to a halt next to a bulletin board covered with construction paper orange and yellow leaves, printed with what she supposed were children's names. She stopped, too, swinging to face him. He was tall, like all the Flanagan men, and even the two-inch heels she wore for work didn't give her enough height to confront him.

He was probably good at intimidating with his height, his keen eyes, and that air of authority that went along with being a minister. She wasn't going to let him force his views onto her, no matter how self-assured he was.

"Nolie is my closest friend," she said firmly. "If she doesn't have the time right now to handle the wedding arrangements, then I'll be happy to take care of them for her."

Brendan raised an eyebrow. "Gabe is my cousin as well as my friend and parishioner. And I intend to listen to what he says they want."

He had her on the parishioner business. Gabe was a member of Brendan's church. Probably Nolie would be soon, as well. Her friend was being absorbed into the big, noisy Flanagan clan at a rapid rate, and Brendan's church was obviously an important part of their lives.

As for her, well, her mother had taken her to church when she was a child, but after her mother's death, her father hadn't set foot inside a church with her. Other than attending a wedding or two, she'd followed his pattern. Religion was a foreign country to her, one she did't have any interest in exploring.

She tried another tack. "Maybe Gabe just doesn't care. A wedding is more for the bride, anyway."

Brendan's eyes weren't the Irish blue of his Flanagan cousins. Instead they were a changeable hazel, and at the moment they looked as remote, green and frosty as an Alpine lake.

"A wedding is a solemn event in the spiritual lives of two people, not an excuse for a party."

Now he really was putting on his minister hat. She was tempted to point out that the wedding decisions weren't really up to him, but he'd simply turn that argument back on her. They weren't up to her, either, until Gabe and Nolie agreed.

She'd already seen how close all the Flanagans were. The only way to win this was to have Pastor Brendan on her side. Then she could present Nolie with an accomplished deed instead of a what-if.

"I'm not talking about turning the wedding into a riot, Pastor. Just making it beautiful and memorable. Surely you don't have any theological objections to that."

The sudden flash of humor in his eyes startled her. "Not theological, no. But we might not agree on what beautiful and memorable is."

He studied her face for a long moment, as if wondering what lay beneath the surface. His steady gaze began to make her uneasy. She didnt have a smudge of mascara on her nose, did she?

"Fair enough," he said finally. "Let's take a look at the sanctuary and talk about what you have in mind."

His tone said he reserved judgment on her view of the wedding. That didn't matter. She'd swing him around to her way of thinking.

Brendan led the way back up the flight of stairs she'd come down. When she hadn't found him waiting in his office for their appointment, she'd followed the sound of thuds, bumps, and jeers to the gym, where he'd been playing basketball with a scruffy-looking bunch of teenagers.

Strange as it seemed, she'd apparently have to negotiate with Brendan to get what she wanted. And she would get what she wanted. Failure wasn't part of her vocabulary. She and Nolie had a kinship that went deeper than friendship or sisterhood, and she'd give Nolie the wedding of her dreams even if she had to go through Brendan Flanagan to do it.

But she'd try a milder tactic first. She'd always found it useful in business to establish some sort of mutual ground. She glanced at him as they walked through another long hallway, this one lined with stained glass windows. The brighter light picked out the fine lines that fanned out from the corners of his eyes, suggesting that he took his responsibilities seriously.

"Was that some kind of a youth group you were working out with in the gym?"

He looked startled, as if he'd forgotten about those kids. "No, not exactly." He hesitated before going on. "This neighborhood has changed since Grace Church was built a hundred years ago. A lot of kids in the area dont have a church to call their own, or any place to hang out except the street corners."

"I've seen them." She frowned. "Frankly, most of the kids I've noticed hanging around the street corners aren't ones I'd care to invite into my church, if I had one."

"Reaching out to people who need help is the church's business." His look was faintly disapproving.

Claire stiffened. Whether he was a minister or not, he didn't have the right to disapprove just because she'd voiced her opinion.

Be agreeable, a little voice cautioned in her mind. You want to gain his cooperation, not put his back up.

"I guess Suffolk isn't just an old-fashioned market town any more," she said.

He nodded, as if Claire were a pupil who'd gotten an answer right. "That's the problem exactly. People still think this is the kind of place where everyone has the same values, but it's not. Suffolk has become a mid-size city with a few city problems no one has figured out how to deal with yet."

"And you're the man to deal with them." She tried to keep the skepticism out of her voice.

That was the sort of thing a politician might say, except that in Brendan's deep voice, it sounded genuine. If he insisted on bringing God into the discussion, she was definitely out of her depth. A Sunday school class when she was seven or eight hadn't prepared her to debate any religious issues with a minister.

Well, that wasn't why she'd come here, in any event. She wanted his cooperation with the wedding. Aside from that, she didn't care how many juvenile delinquents Brendan let take advantage of him.

He opened a paneled oak door at the end of the hallway. They stepped into a vast, echoing space, dimly lit by a bank of recessed lights at the front.

"This is the sanctuary. By the way, I draw the line at live doves flying around in here."

The glimmer of humor he showed again reassured her. Maybe he wouldn't be too difficult to deal with. "Not even one or two?"

"Not even." He fumbled along the wall for a light switch, and the overhead chandeliers came on with a blaze of light, making the sanctuary spring to life. "As you can see, theres a center aisle. I'm told wedding planners like that."

Claire looked the length of the sanctuary. The cream walls were accentuated with walnut arches and wainscoting, and a burgundy carpet crossed the front and swept up the aisles.

"It's perfect." She could visualize Nolie coming down that center aisle, past pews decorated with flowers and ribbons. She could almost hear the murmurs of appreciation.

No, that wasn't a murmur. It was a stifled sob.

Brendan seemed to hear the sound at the same time she did. He spun toward a pew that was half-hidden by one of the columns. What she'd taken for a coat thrown over it was actually a woman, huddled into herself on the cushioned seat.

No, not a woman. This was barely more than a girl, wearing threadbare jeans and a tattered t-shirt. Her long dark hair hung down to screen her face.

Claire took a step forward, and then stopped. This wasn't any of her business.

"Stacy?" Brendan knelt next to the kid, his hand gripping the pew's carved arm. His voice was soft with concern. "What's wrong?"

Obviously he knew the girl, and he'd shifted into minister mode. All his attention was concentrated on the girl, as if he'd forgotten Claire was there.

That was undoubtedly her cue to back away. Even though she didn't want to put it off, apparently their wedding consultation would have to wait until another time.

"I should leave," she said.

The girl looked up at the sound of her voice, her hair falling back from a too-thin face. Claires heart seemed to stop and then resume beating in slow, threatening thuds. The kid's cheek was puffed out, and one eye had been blackened.

It wasn't just the obvious signs of abuse that turned her stomach and made her want to flee. It was the look in the girl's eyes frightened and accepting all at once, like a dumb animal that couldn't escape.

She knew the look. It was the one she used to see in her mirror.